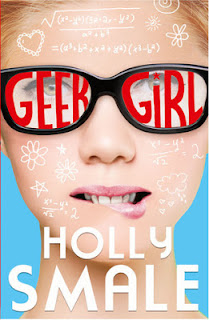 Publisher: Harper Collins
Published: 28th February 2013
Pages: 356
Format: ebook
Synopsis:
Harriet Manners knows a lot of things. She knows that a cat has 32 muscles in each ear, a "jiffy" lasts 1/100th of a second, and the average person laughs 15 times per day. What she isn't quite so sure about is why nobody at school seems to like her very much. So when she's spotted by a top model agent, Harriet grabs the chance to reinvent herself. Even if it means stealing her Best Friend's dream, incurring the wrath of her arch enemy Alexa, and repeatedly humiliating herself in front of the impossibly handsome supermodel Nick. Even if it means lying to the people she loves.
As Harriet veers from one couture disaster to the next with the help of her overly enthusiastic father and her uber-geeky stalker, Toby, she begins to realise that the world of fashion doesn't seem to like her any more than the real world did.
And as her old life starts to fall apart, the question is: will Harriet be able to transform herself before she ruins everything?

Review:
This is the story of Harriet, a geek with few friends and a even less control over her mouth. She is clever, knows all sorts of facts about the world but cannot for the life of her figure out social situations. In fact, her impulse in difficult times is to hide under a table. I instantly fell in love with Harriet - she's a huge nerd, socially awkward and in fact, apart from the random facts, just like me when I was 15! But then she gets the offer of a lifetime (if she realised it) to become a model. Harriet is obviously terrified but in a whirlwind, she goes to Russia and gets photographed in the snow, with a gorgeous boy. Dream come true, right? Not exactly. Because she's lied to her best friend and it's killing her.

Harriet is lovely in that she is normal. A bit weird maybe, but normal. She worries about her dad and step-mum, she feels horrible about lying. Over the course of the story, Harriet grew so much, even while keeping her own identity, just learning to control her urges to babble and opening her eyes to the way the world really worked. Even seeing the fashion world through her eyes was interesting, as I also have no experience in that world, so it was cool to see it through Harriet's eyes for the first time like her.

The story flowed so easily, I was surprised when I'd nearly finished! I really didn't want it to end, but the big thing of this book was the characters. Apart from the madness of Harriet, you see her dad - just as mental - and her step-mum Annabelle, a lawyer with a wicked sense of humour, although I'm not sure she knows it, plus Harriet's best friend Nat, the creepy stalker Toby, and the cute crush Nick. All had their own sense of worth, their own humour and awesomeness, and all added to the story and Harriet's growing understanding of the world.

This counted towards by my genre variety challenge and my ebook challenge. And thank you very much to Harper Collins for the copy on netgalley.
Posted by Anya at 16:25