Devil's Due by Rachel Caine 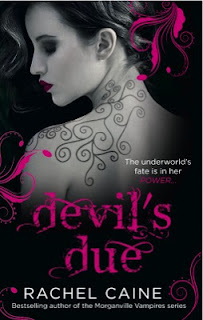 Publisher: Mira INK
Published: 1st February 2013
Pages: 329
Format: ebook
In the series: Devil's Bargain
Synopsis:
The psychic world will never be the same again...
Lucia Garza is trapped in a supernatural power struggle. To save a friend she adreed to work for sinister psychic organisation The Cross Society. But after a death threat that almost succeeds, she's starting to think they want her out of the way. Forever.
Worse, as Lucia uncovers the society's most dangerous secrets, she discovers that she's being used as a pawn between two warring paranormal factions. Caught in a battle no-one can win, Lucia's only choice could be to go against long told prophecy to destroy both the Cross Socitey and its sworn enemies. But what are the consequences of defying destiny?

Review:
Devil's Due is the continuation of Devil's Bargain, the story of two women who play a very important role in the shaping of the future. Unfortunately the sequel does not let on to anything else that might make it easier to understand why the Cross Society thinks so or what the hell is up with Max Simms! At least we got some more of Manny and Pansy.

Devil's Due is very much Lucia's story rather than Jazz's which was weird to begin with but very fast you realised why. Not to say that Jazz and Borden wasn't in the story, they were, but as their relationship - weird as it is - had already been formed, Caine focused on Lucia and McCarthy's this time round. And I must say that their relationship was awesome and yet a little scary when you find out the story behind it.

As I said, Devil's Due didn't release many more details on the Cross Society. We did see more of them and get some more hints and maybe it's just me and my lack of interest in politics but I did not feel like it cleared anything up! Also did not get told much of Lucia's past, which was frustrating because it's a big secret and as we were inside her head this time, you'd have thought we'd get some clue! But no. Luckily the sheer awesome that is Lucia and Jazz saved it, if only because they were just as confused by the whole situation but also managed to get some cool lines in and kick some ass. And boy did they!

Although no less confusing than Devil's Bargain, just to have more of the story is impressive and worth it, but you really do need to focus to get anything out of the convoluted plot!

This counted towards my e-book challenge, and thank you to Harlequin and netgalley for my copy.
Posted by Anya at 10:21