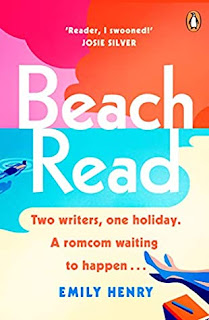 Beach Read
He doesn't believe in happy endings.
She's lost her faith that they exist.
But could they find one together?January is a hopeless romantic who likes narrating her life as if she's the heroine in a blockbuster movie.
Augustus is a serious literary type who thinks true love is a fairy-tale.January and Augustus are not going to get on.But they actually have more in common than you'd think:They're both broke.They've got crippling writer's block.They need to write bestsellers before the end of the summer.The result? A bet to see who can get their book published first.The catch? They have to swap genres.The risk? In telling each other's stories, their worlds might be changed entirely...
January is reluctantly spending the summer at her dad’s secret second home, a year after he died and she met his mistress at his funeral. She is hoping to finish her new novel and get the house ready to sell, while still grappling with the confusing medley of missing and being angry with her father and being unable to get answers from him now.

Meanwhile, her new neighbour is none other than Gus Everett, literary fiction writer and rival since college. Hilarity ensues as they make a bet to write in each other’s genres, including research trips, with the promise for the loser to promote the winner’s next novel.

Secrets can be confusing, destructive and all-consuming. January is still trying to understand her dad’s and what his secrets did to her belief in happily ever after’s. This book was equal parts the warm fuzzies and harsh truths. I laughed, I cried, my heart melted, and all the while, the romantic tropes were cleverly hiding the importance of trusting each other and coming to understand that people are complicated but that doesn’t mean they don’t deserve a happily ever after.

Thank you to the publisher and Netgalley for my copy in exchange for an honest review. 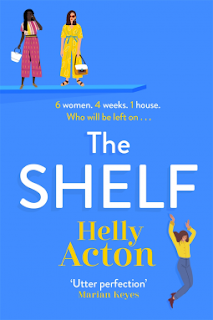 The Shelf
Everyone in Amy's life seems to be getting married (or so Instagram tells her), and she feels like she's falling behind.So, when her boyfriend surprises her with a dream holiday to a mystery destination, she thinks this is it — he's going to finally pop the Big Question. But the dream turns into a nightmare when she finds herself on the set of a Big Brother-style reality television show, The Shelf.Along with five other women, Amy is dumped live on TV and must compete in a series of humiliating and obnoxious tasks in the hope of being crowned 'The Keeper'.Will Amy's time on the show make her realise there are worse things in life than being left on the shelf?
The Shelf started out quite awkward and cringy: a lot of fat-shaming, body image issues, a seriously unhealthy relationship being glossed over…. But then, as the women get to know each other, bond over the stupid and insane reaction the show is getting, and from the ridiculous behaviour of the host, the deeper and more complex issues are addressed. And very well, I might add!

From such a mix of women, we see a mix of attitudes; Jackie and Gemma are unabashedly themselves and labelled bitch because of it, Lauren doesn’t hide that she likes sex, Kathy is an older woman and heaven forbid we see one of those on TV! Hattie and Amy have various body and self-esteem issues, and Flick seems to set feminism back about sixty years with her desire to be a 1950’s housewife. But as we learn about them, as we hear about their backgrounds, about what they want and why they want it, the understanding comes that all of their versions of feminism and femininity are valid.

Hilarious and stupid tasks they are set, in order to prove themselves worthy of a man: taking care of a doll baby, planning a perfect garden party, and learning how to take care of your man’s needs. The whole thing made me equal parts growl with anger and giggle from the absurdity but it did make me think about double-standards, the pressures of living our lives online and the sheer performance of being “perfect for a man”, as if that’s the most important thing a woman can achieve.

I wasn’t sure I’d like it at the beginning; it was brash and weirdly terrifying in the way Acton held a magnifying glass to our society’s need to document our “picture perfect” lives online. But underneath all the gloss of Instagram and the dangers of reality television, it was about female friendship.

Thank you to the publisher and Netgalley for my copy in exchange for an honest review.