Did I Mention I Miss You? by Estelle Maskame 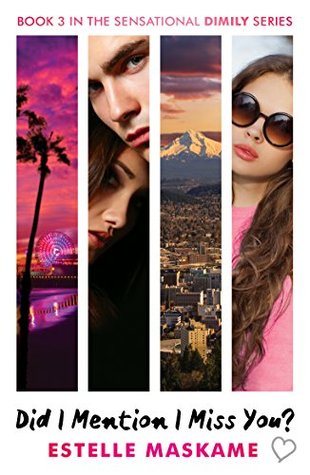 It’s been a year since Eden last spoke to Tyler. She remains furious at him for leaving her and has moved on with life in Chicago, where she is at University studying psychology. As school breaks up for the summer, she heads back to Santa Monica, but she’s not the only one with that idea…

Despite their break-up and Tyler’s abrupt departure last summer, is there something Tyler is keeping from Eden? Are they both as over each other as they thought, and could Eden even begin to forgive Tyler?

In Did I Mention I Miss You?, the explosive finale to Estelle Maskame’s phenomenal DIMILY trilogy, can Tyler and Eden finally work things out, against all the odds?

The finale in this amazing trilogy is finally here! I really wanted to know how Maskame was going to deal with the horrible cliffhanger at the end of book two, as Tyler walked out on Eden and left her to deal with the fallout of their relationship becoming public. Well, it's been a year and Eden has had time to go from missing Tyler to being angry with him for abandoning her. So when he turns up again, their reunion isn't what Tyler obviously thought it would be!

The whole story felt less frenzied and a little bit less dramatic, at least in that they have all had a chance to digest the news of their relationship, and while some still hate it, Eden and Tyler go about it much more maturely. Eden's dad and her step-brother Jamie actively despise their relationship but Tyler has obviously grown up a lot in his time away, as shown in that Tyler doesn't punch anyone in the face. But they did need to get away from their families and that's how they end up in Tyler's new home of Portland.

Maskame did an excellent job in making them friends first before anything can be started up again between them. I really liked that, it allowed them to get to know the new versions of themselves and fall in love all over again as adults.

She also really blurred the line between support and co-dependency; Eden has had no problem being their for Tyler in the past but he comes back with the realisation that it isn't healthy for him to depend on Eden for everything from talking him down when he's angry, to building his confidence back up. They come back together by the end of this book as mentally healthy adults and equals and I really appreciated the nuances of them having time to mature but still wanting to be together for all the right reasons. A fantastic and satisfying end to an amazing romantic story.