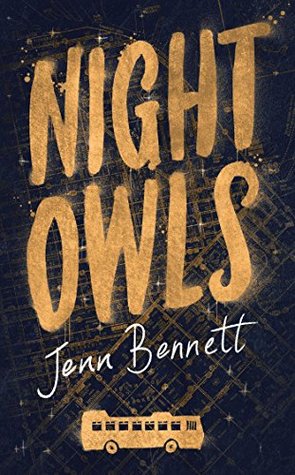 On midnight rides and city rooftops, Beatrix begins to see who this enigmatic boy really is. But Jack is hiding much more - and can she uncover the truth that leaves him so wounded?

A unique and profoundly moving novel, Night Owls will linger in your memory long after the final page.

I've been really looking forward to this one. I know most people read it last year when it came out and I'm actually quite angry with myself for letting it sit on my kindle for so long! We see Bex bump into Jack on the night bus of all places and get instantly drawn to him and his backpack full of spray cans.


Art was a huge part of this story. Bex wants to make a career out of drawing anatomically correct, medical illustrations, which is completely different to anything I've read and I loved how it wasn't portrayed as emo or goth, just scientific and important to learning. Then there's Jack and his giant gold lettering, drawing attention to the little important things in life worth taking a moment to appreciate, illegal as it may be. However they drew or scribbled, it was all about expressing themselves.


Then there was the other side of the coin and Jack's real reason for becoming a graffiti artist: his mentally ill sister. With the stigma around mental disabilities, we saw how the whole family was effected when Jack's sister was admitted into the psych hospital for schizophrenia. As a politician, their father was worried about his image, how it was affect his job as mayor. But all Jack could see was how his twin sister was being hidden away and ignored.

There was also a very mature attitude to sex. As they grew closer and started talking about progressing their relationship, it turns out that it was his first time, but not hers, so Jack (bless his heart) asked her what he should do and not do, to make sure it was good for her! If only all boys were like this, open and honest rather than taking things too seriously or acting up. Also that Jack wasn't intimidated or emasculated by the fact that Bex had already had sex, because that's just sexist to assume otherwise. My feminist brain was overjoyed by this mature and honest talk about sex before they attempted anything, plus it was still sexy and true to real life with all its awkward fumbles and funny, intimate moments when they finally did it.

It was very funny, beyond adorable and dealt with so many hidden issues very well. I thought it was getting a contemporary romance but it dealt with everything from first loves and first times to crime and mental health, and I loved it for that.