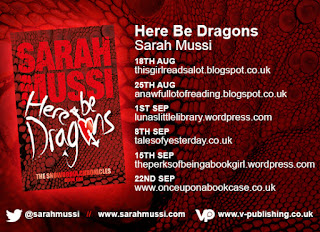 Today we have post number two in Sarah's epic blog tour as she explains her motivation and writing method for Here Be Dragons, first book in her new series about Welsh dragons. Check out my review here and then read on! Take it away Sarah!

And huge thanks to Anya of An Awful Lot of Reading for hosting my second post!

Hello and Welcome back to my Blog Tour for HERE BE DRAGONS, Book One in my new trilogy: THE SNOWDONIA CHRONICLES!

Welcome to Sarah’s journey of discovery in which Sarah interviews herself about:

Why she decided to write HERE BE DRAGONS in the first place.
a) Where she got the inspiration from.
b) Her whole mountain obsession thing
c) What she did in the way of research, and
d) How she actually wrote the book etc etc !

So right now if you were climbing Everest you would now be at:
Icefall, 5500 m - 6100 m / 18000 ft - 20000 ft.
www.mounteverest notes:
‘This place is similar to a huge horror-chamber at an amusement park. Only this one is for real. There are countless scary things that can happen here.
A crevasse might open under you. An ice-pinnacle can fall on top of you. The entire area can collapse. It’s simply not a place for a picnic and most of us just concentrate on getting out of there as quickly as we possibly can.’

On my Blog Tour you are at the Inciting Incident. It is very like Icefall and not just because it begins with an “I”

You see I have structured my Blog Tour around the idea of how you actually structure a book! So Post One was about me finding The Hook, the background, the Set-up, the Buzz to get me through. But this post is about the Inciting Incident (The Three Act Structure…) 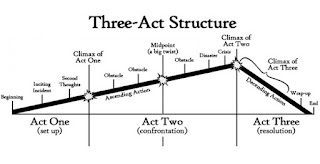 How does the Three Act Structure figure in this Sarah?

I realised my mistake as soon as I got started. I hit the Icefall hard. An ice pinnacle fell on my head and a crevasse opened up under my feet. Frankly, I had no idea about: tension, pace, voice, setting, structure, plot or character…

Then I found a very helpful book on screen writing, which had a very easy to read diagram that looked exactly like a mountain. And I love mountains. So once I got hold of that shape and discovered The Three Act Structure, I was able then to put my ideas into some kind of shape too.

Okay, if the hook, the background was the mountains in Wales and trains and the mythology and the idea of dragons, then the Inciting Incident, of course, was actually starting out on my narrative, finding the exact right time and place to begin my story. 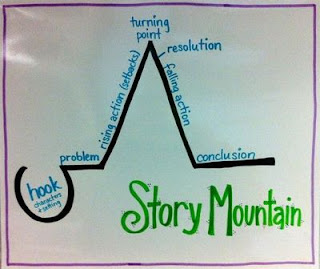 So where was that, then, Sarah?

Now as every writer knows, it's all very well to start a story at the start - with: ‘I woke up with a start.’ or “Wake up! Wake up! Its time to start getting up to go to school!” but we all know that that is not actually the best way to start a story.

According to age old wisdom – the very best way to start a story is, apparently, according to the Romans who obviously spoke in Latin is in medias res (in cool Roman-ish style writing) that means: in the middle of things. Not at the beginning like you’d think. 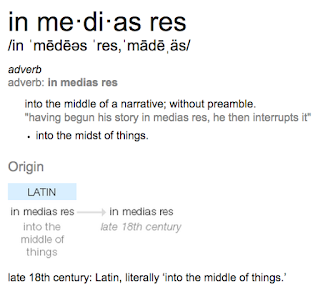 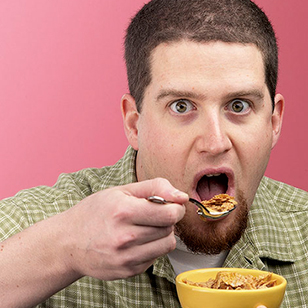 A good way to start the day, but not a story.

So I had to find somewhere to start ‘in the middle of things’ after/or before my hero, Ellie has seen the boy in the mist… that would be interesting and important enough to get the story moving (fingers crossed) and at the same time would hold my reader to the page, so they might want to know what might happen next. 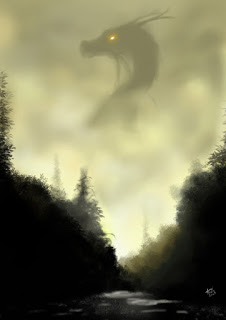 Dragon in the mist – start here? 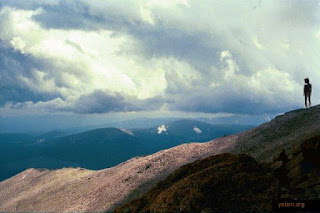 Boy in the mist?

So I thought about putting some ideas into what I call my cauldron: my mental cooking pot. I put in the ideas of: 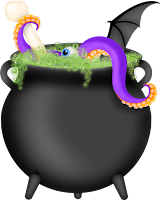 So with all these things, I started trying to think what might happen -  I needed something that would demand urgent action (plot is action – innit?) that might get the story going? (Of course, it would have to be a problem /something gone wrong, because as we all learn in nursery school that a story is a character plus a problem.)

So how did you solve that, Sarah?

Ah. Well into the pot I put:


Then I had a jigsaw think. (Does that need explaining?)
And came up with - obviously, somebody could get lost, or they could be in danger on the mountain? Like mist=lost +snow=cold = freezing= death?
That seemed to me the most exciting and likely kind of opening ‘in Media Res’ that could happen on Snowdon.

Somebody is in danger, there on the mountain, lost in the snow, freezing to death.

Fabulous - that was really great because we know avalanches/mountain rescues etc do happen. So into the pot:
·         a mountain rescue
But who could be caught out in the snow? Ellie? The boy? Another? 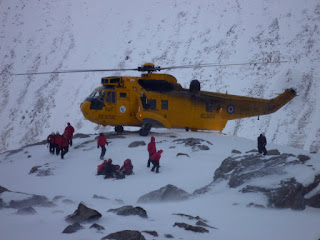 Not Ellie, my main character, because she is a feisty girl of the mountains, so she's not going to be daft enough to be caught out needing to be rescued, is she?  Plus heroes don't need rescuing do they? So she has got to be part of the rescue team. She can go to do the rescue. *(That's great, except she is too young to be part of a proper search and rescue team – put on To Be Fixed later pile)

But excuse me, Sarah, who is she rescuing?

And why would they be out on the mountain in the middle of winter all alone, so as to need rescuing?

Well that was my first challenge. If I knew that, if I could crack that, I would have a fantastic inciting incident to start my story off with. And I did crack it!

So here it is, the inciting incident, set in the prologue, a sneak preview of HERE BE DRAGONS.

Prepare yourself for a visit to Icefall.

‘The girl turns her face to the summit, above her the air shudders. Just thirty paces. If she can only reach the safety of the rocks. Heart pounding, blood hammering, she poises herself.
Run.
She races forward. She leaps from the ground, stumbles past the stony crags of the lair, bursts through the drifts of dark snow. The air shivers around her; she tears through it, swerves past the cliff edge above the llyn.
That dark fearful cliff edge.
An appalling shriek rents the air. The sound of teeth crashing, talons scraping. She imagines the yellow eyes searching for her. Soon they will know she’s gone. They will nose the air, catch her scent. Soon they will come for her.
Get to the rocks.
Steps crash behind her, mighty footfalls. She hears ragged breath at her back. A fetid stench slams into the dawn. They are coming.
Up ahead the rocky cave opens. Ten metres away. Ten metres of cliff edge. She weaves in between the clumps of snow-bound heather, ducking, leaping, twisting. The ground is icy, smooth, treacherous. She slips, rights herself. A booming, a shrieking tears at her ears.
They know she’s gone.
Just one chance now.
Just run
Just pray.
Just make it away from the old fortress of Dinas Emrys.
A deafening roar splits the dawn.
Hurry
She sprints. The path turns. She skids out of control. She’s falling. She screams; her arms outstretched. She hits the ground, tumbles forward.
“Help!” she cries weakly, “Oh somebody help me!”
And the earth beneath her feet gives way. Heart bursting, body falling, twisting, turning, down she plummets over the icy cliff edge.
Down into the gully beneath.’ 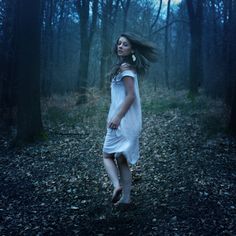 
To be in with a chance of winning a copy of Sarah’s book, answer this question: who is Ellie’s best friend? The answer can be found by following this link: https://www.v-publishing.co.uk/books/categories/fiction/here-be-dragons.html.
Email your answer to info@v-publishing.co.uk and one winner will be picked at random each week of Sarah’s blog tour.
Posted by Anya at 09:00