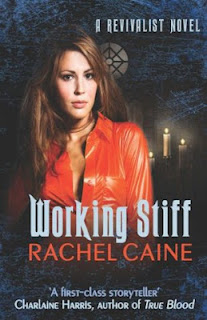 Publisher: Allison and Busby
Published: 31st October 2011
Pages: 473
Synopsis:
Bryn Davis knows working at Fairview Mortuary isn't the most glamorous career choice, but at least it offers stable employment--until she discovers her bosses using a drug that resurrects the clientele as part of an extortion racket. Now, Bryn faces being terminated--literally, and with extreme prejudice.
Wit the help of corporate double-agent Patrick McCallister, Bryn has a chance to take down the bigger problem--pharmaceutical company Pharmadene, which treats death as the ultimate corporate loyalty program. She'd better do it fast, before she becomes a zombie slave--a real working stiff. She'd be better off dead...

Review:
The first in the Revivalist series, this book is everything I've come to expect from Rachel Caine: great writing, complex plot and incredible characters. Saying that, the story was definitely not at all what I thought was going to happen but still amazingly good. Without giving too much away, let's just say I was shocked at the twists in the plot,  both in who Bryn ended up falling for and in what happened to her - more specifically, how fast it happened to her!

I really felt for Bryn, bless her. She just cannot catch a break! Having just moved from military to civilian, Bryn is easy to relate to with her worries, family drama and tendency to break down. I also loved how, while she was strong and definitely stubborn, Caine did not even try to make her into something she's not, i.e. Wonder Woman. Even with a military background, she's still an average woman that has been handed a really crap deal and she doesn't like it. Understandably.

Caine does not sugercoat the grossness. Of course not, this is fundamentally a zombie novel, just with a very unique spin. While there is quite a bit of grossness, on plenty of levels (you know, icky come-on's to rotting flesh), Caine doesn't bog us down with, evening it out with some normalcy, a little budding romance and sibling squabbles.

An overall excellent read, with characters to love and hate - won't even talk about Fast Freddy - and an incredible concept that left me both intrigued and feeling a little ill.
Posted by Anya at 17:36