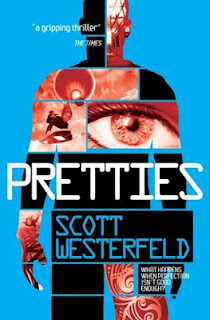 Publisher: Simon and Schuster
Published: 1st November 2005
Pages: 370
Synopsis:
Tally has finally become pretty. Now her looks are beyond perfect, her clothes are awesome, her boyfriend is totally hot, and she's completely popular. It's everything she's ever wanted.

But beneath all the fun -- the nonstop parties, the high-tech luxury, the total freedom -- is a nagging sense that something's wrong. Something important. Then a message from Tally's ugly past arrives. Reading it, Tally remembers what's wrong with pretty life, and the fun stops cold.

Now she has to choose between fighting to forget what she knows and fighting for her life -- because the authorities don't intend to let anyone with this information survive.

Review:
So first things first, I suppose I'd better mention that I didn't like this one as much as I did its predecessor. Which isn't fair because I still really like this world and all its weird little parts, its perception of beauty and its social rules. But that's where I tripped up a little reading Pretties: it took me ages to get the hang of pretty-speak. Even now, I still don't really get what bubbly means!

Tally was just as annoying as before, but now she is even more selfish and petty. Which is sort of the point of the lesions. She has these amazing flaws that make her real but in this instalment, she mostly came across as clueless, yet with moments of strength. This mostly came from her love for Zane. Which, don't get me wrong, is admirable but I don't like Zane. It isn't fair, because there is no reason for it, he just... he doesn't do anything and when he does, he does it wrong! I didn't quite trust him at the beginning and even as Tally fell for him, I was always on guard. Stupidly, it turns out, but I couldn't help it.

Another character that I lost hope for was Shay. She literally scared me in this book. I really liked her, then she turned pretty and into an air-head, then she turned violent towards Tally! Shay was more selfish, more strong and way more dangerous. The whole cutting thing she started creeped the bejesus out of me.

Pretties didn't do what I thought it would. As a happy-ending romantic, I wanted Tally to run away with David. Obviously that didn't happen. I suppose this plot turn is more realistic and understandably, because this world wasn't going to get fixed by a few runaways.

Even though this book was a bit hit and miss for me, I would still happily recommend it and I will finish this series, because I have to know what happens to the New Smoke!
Posted by Anya at 15:03