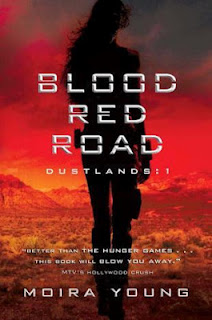 Publisher: Marion Lloyd (Scholastic)
Published: 1st January 2011
Pages: 459
Synopsis:
Saba has spent her whole life in Silverlake, a dried-up wasteland ravaged by constant sandstorms. The Wrecker civilization has long been destroyed, leaving only landfills for Saba and her family to scavenge from. That's fine by her, as long as her beloved twin brother Lugh is around. But when a monster sandstorm arrives, along with four cloaked horsemen, Saba's world is shattered. Lugh is captured, and Saba embarks on an epic quest to get him back.

Suddenly thrown into the lawless, ugly reality of the world outside of desolate Silverlake, Saba is lost without Lugh to guide her. So perhaps the most surprising thing of all is what Saba learns about herself: she's a fierce fighter, an unbeatable survivor, and a cunning opponent. And she has the power to take down a corrupt society from the inside. Teamed up with a handsome daredevil named Jack and a gang of girl revolutionaries called the Free Hawks, Saba stages a showdown that will change the course of her own civilization.

Review:
I'll admit, I was a bit apprehensive when I started this, mistakenly thinking it would be similar to After The Snow. Boy was I wrong! And happily so! Saba's voice was so distinctive and true and a little annoying but mostly real. She was rude, stubborn, strong and a little weird in her placement of love. Don't get me wrong, I might not be a twin but I understand the bond between them; I also have a little brother and while he is annoying as hell, I cannot imagine hating him like Saba does Emmi.

This confusion in my interpretation of Saba did not last long, thankfully. I warmed to her as she matured, learned to accept and even care for Emmi, never wavered in her hunt for Lugh. One thing though: did not understand how she resisted Jack for as long as she did! I had to keep reminding myself she was so antisocial because she literally did not know anyone other than her family. And that was why poor Saba, at 18, didn't get flirting with a cute boy.

Let's talk about Jack. Not sure if I just thought he would be cute or important or whatever, but I liked him immediately. His cockiness really should have annoyed me, and I'm sure in real life he would have at least some of the time, but just like he fell for Saba's smile, I melted whenever he smiled. Damn him!

Moira Young has created an incredible dystopian world that, much like Uglies, explains how our world moved on and broke itself to form this fictional one. Creepy really, to think that Hopetown is a completely possible and plausible future for us. *shudder*

Saba's adventure through desert and an utter lack of moral civilisation was awe-inspiring, moving and just plain amazing. I cannot wait to read Rebel Heart!
Posted by Anya at 12:17