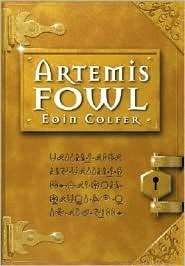 Publisher: Puffin
Published: 3rd May 2001
Pages: 280
Synopsis:
Twelve-year-old Artemis Fowl is a millionaire, a genius—and, above all, a criminal mastermind. But even Artemis doesn’t know what he’s taken on when he kidnaps a fairy, Captain Holly Short of the LEPrecon Unit.These aren’t the fairies of bedtime stories; these fairies are armed and dangerous.Artemis thinks he has them right where he wants them…but then they stop playing by the rules.


Review:
Like many a teenage girl I'm sure, I missed this trend that seemed to engulf the boys. Late to the party as I normally am, I'm very glad I read this at last!

I love fantasy books. If they put an original spin on an old legend, even better. This is probably the reason why I loved Colfer's underground fairy world so much. He explained how LEPrecon and other magical stuff had melted into our world. Even though their world had a lot of similarities to ours, it was different, refreshingly original and not to mention threatened by the humans a.k.a Mud People.


Artemis is an evil little child, very clever and determined but I did like how his motivations were somewhat pure in restoring his family's name. Made him more believable and a little bit cute. And Butler! Even after just the first few pages, I imagined him as a Navy Seal from NCIS: tough and strong and sneaky. I thought it was really touching how much he cared for Artemis as well, you expect someone like him to only be in it for the money and/or action. Finally, Holly. Pure awesome! She was stupidly brave and reckless but clever and resourceful; I loved how quick-thinking she was. As well as other memorable characters such as Root, Holly's masculine but secretly awesome commander, Foaly the computer genius centaur with a really annoying wit to match Artemis, and a rather disgusting drawf who can tunnel like no other.


Filled with action and secrets, leaving no moment boring, Artemis Fowl is a quick, fun read with an amazing smart-ass narrator and a promise to make you re-think the legends.
Posted by Anya at 15:27