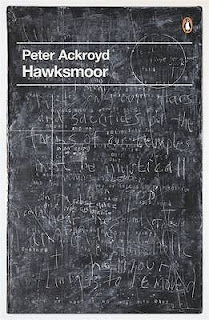 Publisher: Hamish Hamilton
Published: 1st March 2010
Pages: 288
Goodreads Synopsis:
In the aftermath of the great fire, eighteenth-century London is a city of extremes. Squalor and superstition vie with elegance and reason as brilliant architect, Nicholas Dyer, is commissioned to build seven new churches. They are to stand as beacons of the Enlightenment - but Dyer plans to conceal a dark secret at the heart of each one. Two hundred and fifty years later, in the same vast metropolis, a series of murders occur on the sites of those same churches. Detective Nicholas Hawksmoor investigates, but the gruesome crimes make no sense to the modern mind...Combining thriller, ghost story and metaphysical tract, "Hawksmoor" won the Whitbread Book Award and "Guardian" Fiction Prize in 1985.


Review:
It seems like such a good idea, two timeline's interweaving, kind of a crime novel crossed with something like The Time Traveller's Wife with a bit of obscure Satanism thrown in for good measure. But, and I'm not sure if this was Ackroyd's intentions, it doesn't quite come off like that. In reality, or whatever world Ackroyd is writing about, it comes across as a split-personality disorder across the centuries. Don't get me wrong, for the right audience, it is completely worth digging through the dredge of London's underbelly and the odd spellings of the seventeenth century. But I am not the right audience, for the simple reason that I prefer my fiction to make sense. Probably didn't help I read most of the second half of this novel with a cold!

Dyer, the architect in 17th C, is based on Nicholas Hawksmoor, real-life apprentice to Christopher Wren, the man behind the rebuilding of St Paul's (You can tell I've studied too much on London's history!). The story intertwines the building of his churches with the ritualistic killings (it is suggested) he performs there and 200 years later, the same (sometimes) murders being investigated by Hawksmoor, the fictional police detective it is thought to be based on Ackroyd himself. Confusing, huh? You're telling me!

While I'm not sure if I even liked this book, I would recommend sticking through to the end. Even if the ending isn't exactly satisfying and just as confusing as the rest of the narrative.
Posted by Anya at 16:55