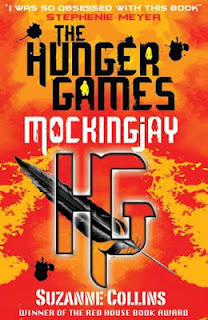 Publisher: Scholastic
Published: 25th August 2010
Pages: 455
Goodreads Synopsis:
Young Katniss Everdeen has survived the dreaded Hunger Games not once, but twice, but even now she can find no relief. In fact, the dangers seem to be escalating: President Snow has declared an all-out war on Katniss, her family, her friends, and all the oppressed people of District 12. The thrill-packed final installment of Suzanne Collins' Hunger Games trilogy will keep young hearts pounding.

Review:
I don't think anything could prepare me for the ending of this brilliant trilogy! During the course of this book, you met new characters, saw new sides to characters we already know and love, and felt genuinely terrified for not only Katniss but her family and Peeta and Gale and Finnick.

Without spoiling too much, there were a number of twists that I did not predict. Pretty much the whole of 13 was somewhat predictable after the comments in Catching Fire, yet I did not see the ruthlessness of Coin and Plutarch in their desire to see the Capitol fall. I really did cheer them on in their quest but some confessions from Finnick and Peeta's return made me realise how utterly horrible the Capitol was. It broke my heart to see Katniss so fragile and Peeta so... unlike him. I think I even cried a little!

The final conclusion - the last big fight and the aftermath - was so completely shocking I could not even believe it. Prim and President Snow and Coin? I just can't...

I wanted so much a happy ending for Katniss after all her fighting and loss and, even though for the romantic in me it seemed a little rushed, I was not disappointed. The lasting message on the Capitol's influence was touching and incredible.
Posted by Anya at 17:44