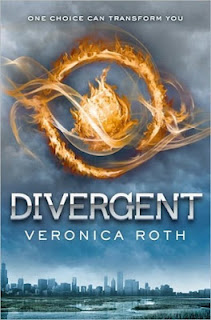 Publisher: Harper Collins
Published: 3rd May 2011
Pages: 487
Goodreads Synopsis:
Beatrice "Tris" Prior has reached the fateful age of sixteen, the stage at which teenagers in Veronica Roth's dystopian Chicago must select which of five factions to join for life. Each faction represents a virtue: Candor, Abnegation, Dauntless, Amity, and Erudite. To the surprise of herself and her selfless Abnegation family, she chooses Dauntless, the path of courage. Her choice exposes her to the demanding, violent initiation rites of this group, but it also threatens to expose a personal secret that could place in mortal danger. Veronica Roth's young adult Divergent trilogy launches with a captivating adventure about love and loyalty playing out under most extreme circumstances.


Review:
Instantly hooked. And I mean I could not put this down and finished it in two days. Which, for me, is pretty incredible. The dystopian world of five factions, made to work because of the threat of war if they didn't, was automatically interesting to me. I instantly wanted to know more about them, who they were and why they were formed. You really did have to pay attention to detail and I found myself flicking back to remind myself why Candor was annoying to Tris!

Oh, Tris. She is a fantastically written heroine. Strong but kind of scared. Developing through the novel, growing into the person Four wants her to be and who she has to be to survive. She is so completely human, worried for and missing her family, sometimes stupidly brave and sometimes stupidly selfish but it works. Not to forget, of course, the amazing chemistry between her and Four, which after a while, I really began to look forward to.

The story was brilliantly engaging: the subtle hints of a secret revolution were almost perfectly intertwined with Tris' introduction to her new faction. While I did have my doubts about Dauntless at first, I started to come round with Tris' introduction to it, especially when Four described it better than Eric's vision for the faction. I would have picked Erudite, at least until I realised they weren't just book-nerds, they were knowledge-thirsty, kind of twisted, and power hungry. That disappointed me. Yet, throughout the book, it picked flaws in every faction and that is what dystopian fiction is supposed to do, in my opinion: find faults in our logic of "perfect".

Just insanely gripping, Roth threw us right into the train with the heroes and didn't stop the drama and awesome fight scenes until the end. I am really looking forward to what I hope will be an amazing sequel. If only just so I can find out what's the other side of the walls!
Posted by Anya at 15:56