True Love at the Lonely Hearts Bookshop by Annie Darling 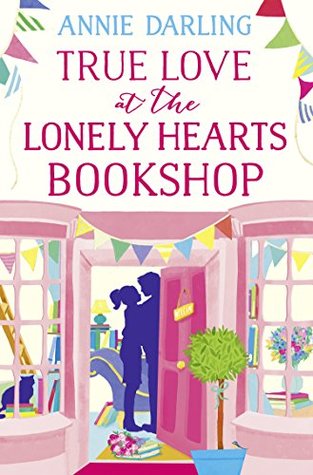 It's a truth universally acknowledged that a single woman in possession of a good job, four bossy sisters and a needy cat must also have want of her one true love. Or is it?

Verity Love – Jane Austen fangirl, manager of London’s first romance-only bookshop Happy Ever, and an introvert in a world of extroverts – is perfectly happy on her own (thank you very much), and quite happy hiding in the office and lying to her friends about her fictional boyfriend Peter, whose presence is very useful for getting her out of social events.

But when a case of mistaken identity forces her to introduce a perfect stranger as her boyfriend, Verity’s life suddenly becomes much more complicated.

Because ‘Peter’ is actually Johnny, and he too could use a fictional girlfriend. So against her better judgement and because she can't stand sitting on the sad singles table, Verity and Johnny decide to partner up for a summer season of weddings, big number birthdays and garden parties, culminating in her sister’s Big Fat Wedding.

And by the end of the summer, there’s a bad case of heartache that even Verity’s beloved Pride And Prejudice might not be able to cure…

This is the sequel/companion novel to The Little Bookshop of Lonely Hearts, this time following the story of Verity, the extremely introverted but none the less lovely manager at the bookshop. It has long been Verity's practice to have a made-up boyfriend to get friends and family off her back, but when Verity's sister and friend follow her, expecting to see the fictional Peter, Verity panics and grabs Johnny.

Over the course of the summer, Verity and Johnny act as each other's plus-ones to social events, being introduced as friends but letting people think what they may - and thus getting them off their backs about sending them on blind dates.

It was so much fun getting to know Verity - all we really saw of her in book one was the shy, quiet and sweet woman who didn't like to get drunk and make out with random guys. But here, we could see how her past influenced her decisions, especially in her social and love life.

Then there was Johnny. He told Verity right off not to fall in love with him because he was in love with someone else. Bit presumptuous but whatever, consider Verity warned. But what Verity didn't know was who he was in love with and why they couldn't be together, and boy was it dramatic! I won't spoil anything but who it turned out to be was clever and hilarious and allowed for some funny and cringey moments.

Never the less, it was sweet and heart warming to see Verity and Johnny grow closer and begin to trust each other, not just with awkward social situations, but like when Johnny wanted to get out of his unhealthy relationship.

The whole story was equal parts hilarious and adorable, it was the perfect British summer romp and even though they hit several bumps along the way, I'm very glad Verity and Johnny could get over themselves and learn to love again.

Published 10th August 2017 by Harper. Thank you to the publisher and Netgalley for my copy in exchange for an honest review.
Posted by Anya at 09:00