The Little Bookshop of Lonely Hearts by Annie Darling 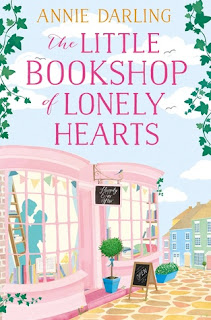 Once upon a time in a crumbling London bookshop, Posy Morland spent her life lost in the pages of her favourite romantic novels.

So when Bookend’s eccentric owner, Lavinia, dies and leaves the shop to Posy, she must put down her books and join the real world. Because Posy hasn’t just inherited an ailing business, but also the unwelcome attentions of Lavinia’s grandson, Sebastian, AKA The Rudest Man In London™.

Posy has a cunning plan and six months to transform Bookends into the bookshop of her dreams – if only Sebastian would leave her alone to get on with it. As Posy and her friends fight to save their beloved bookshop, Posy’s drawn into a battle of wills with Sebastian, about whom she’s started to have some rather feverish fantasies…

Like her favourite romantic heroines, will she get her happy ever after too?

This was actually recommended to me by Sarra Manning at YALC (you know, as you do!) and I am a bit of a sucker for sweet romantic contemporaries like this, especially ones centred around books.

On the surface, this is a proper cutesy story, and it was a brilliant love story, but it had surprisingly deep undertones, specifically grief. Posy inherits the bookshop after her boss and friend dies, and Lavinia bought it after Posy's parents, who ran it and its neighbouring tea room, died. Did that make sense? Basically Posy and her younger brother has dealt with a lot of loss and keeping the bookshop in the family, so to speak, meant a lot to them all. And even though Posy had no clue on how to run a successful business, she had a great team around her and a real passion for books. That, I could immediately support!

Sebastian was a great antagonist/love interest. He was gorgeous but unfortunately knew it - we all know the type. He was a fantastic character for Posy to cross swords with, having practically grown up together they shared a history with Lavinia and the bookshop. Speaking of, it was a surprisingly brilliant idea to turn it into a specialised romance bookshop but of course Sebastian can't have that - the nerves and cringe of him trying to turn into a crime shop was equal parts awful and hilarious!

I totally flew through this, it was just a light-hearted and heart-warming love story, set in a bookshop - who could ask for more!