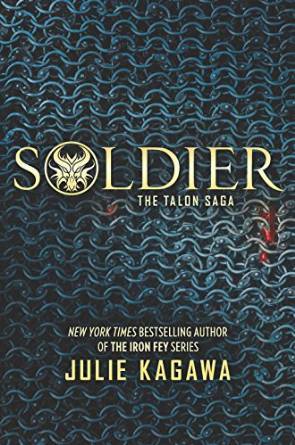 When forced to choose between safety with the dragon organization Talon and being hunted forever as an outcast, Ember Hill chose to stand with Riley and his band of rogue dragons rather than become an assassin for Talon. She's lost any contact with her twin brother, Dante, a Talon devotee, as well as Garret, the former-enemy soldier who challenged her beliefs about her human side. As Ember and Riley hide and regroup to fight another day, Garret journeys alone to the United Kingdom, birthplace of the ancient and secret Order of St. George, to spy on his former brothers and uncover deadly and shocking secrets that will shake the foundations of dragons and dragon-slayers alike and place them all in imminent danger as Talon's new order rises.

Here we are for book three in the series, and although lots have changed, I still loved it. This time, we're still on the run with Ember, Riley and Wes as Talon and St George hunt for rogue dragons that threaten humanity. We see new Eastern dragon in the form of Jade and with her, the differences between west and east in their control of dragon-kind were staggering; Jade and her culture revered dragons and they were pretty much left to their own devices but when Talon came a-knocking, their way of life was destroyed all because they wouldn't come under Talon's thumb. As if we needed any more reason to hate Talon!


Meanwhile, Garret has just uncovered some damning truth about St George's leader's allegiance but lacks the evidence. By rescuing and then teaming up with Ember and Riley, they share a common goal of bringing down the corrupt dragon hunters, but must suffer some very awkward encounters. I felt so sorry for Ember, she obviously had feelings for both Riley and Garret but for very different reasons. I was just as torn as Ember between Riley and Garret - I am rooting for Garret though, let's be clear!


We had lots more perspectives, from Ember, Riley and Garret, to Dante in Talon, and Garret's past. It was all really interesting, if a little confusing sometimes, to flit between them and see the same event through different eyes. There was still danger and running/flying for their lives but Wes provided some much needed comic relief, plus there was much speculation about Ember's love life!


All in all, a great addition to the series that answered some questions but still left me wanting more.


Published 26th April 2016 by Harlequin Teen. Thank you to the publisher and Netgalley for my copy in exchange for an honest review.
Posted by Anya at 09:00