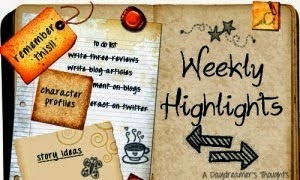 It's my birthday! Well, it was on Friday and while I am getting older, I'm getting more sensible presents like baking equipment but I did get a few books and DVD's and money to buy more books and DVD's!

Just started The Assassin's Blade and I am so excited to learn more about Celaena! Details below.

On My Bookshelf
Severed Heads, Broken Hearts by Robin Schneider

Golden boy Ezra Faulkner believes everyone has a tragedy waiting for them - a single encounter after which everything that really matters will happen. His own tragedy waited until he had everything to lose - in one night, a reckless driver shatters Ezra's knee, his athletic career, and his perfect life.
No longer part of the popular crowd, Ezra finds himself at the table of misfits, where he encounters Cassidy Thorpe. Intelligent, effortless and wonderfully weird, she is unlike anyone Ezra's ever met before. Together they discover flash mobs, buried treasure, secret movie screenings and a poodle with a questionable history.
But as Ezra dives into new friendships and new love, he is forced to ask: if you've managed to survive disaster, what happens when it strikes again?

A bit of an impulse buy, it was just 99p on kindle ebooks and I wanted to see what the fuss was about.

I was brave
She was reckless
We were trouble

Best friends Caddy and Rosie are inseparable. Their differences have brought them closer, but as she turns sixteen Caddy begins to wish she could be a bit more like Rosie – confident, funny and interesting. Then Suzanne comes into their lives: beautiful, damaged, exciting and mysterious, and things get a whole lot more complicated. As Suzanne’s past is revealed and her present begins to unravel, Caddy begins to see how much fun a little trouble can be. But the course of both friendship and recovery is rougher than either girl realises, and Caddy is about to learn that downward spirals have a momentum of their own.

This sounds brilliant and it's already got a lot of buzz online. Thank you Netgalley!

Carry On by Rainbow Rowell

Simon Snow just wants to relax and savour his last year at the Watford School of Magicks, but no one will let him. His girlfriend broke up with him, his best friend is a pest and his mentor keeps trying to hide him away in the mountains where maybe he'll be safe. Simon can't even enjoy the fact that his room-mate and longtime nemesis is missing, because he can't stop worrying about the evil git. Plus there are ghosts. And vampires. And actual evil things trying to shut Simon down. When you're the most powerful magician the world has ever known, you never get to relax and savour anything.
Carry On is a ghost story, a love story, a mystery and a melodrama. It has just as much kissing and talking as you'd expect from a Rainbow Rowell story - but far, far more monsters.

A birthday present to myself! No explanation needed, really.

Celaena Sardothien owes her reputation to Arobynn Hamel. He gave her a home at the Assassins' Guild and taught her the skills she needed to survive.Arobynn's enemies stretch far and wide - from Adarlan's rooftops and its filthy dens, to remote islands and hostile deserts. Celaena is duty-bound to hunt them down. But behind her assignments lies a dark truth that will seal her fate - and cut her heart in two forever...Explore the dark underworld of this kick-ass heroine and find out how the legend begins in the five page-turning prequel novellas to the New York Times bestselling Throne of Glass series.


The Court of Thorns and Roses by Sarah J Maas

Feyre’s survival rests upon her ability to hunt and kill – the forest where she lives is a cold, bleak place in the long winter months. So when she spots a deer in the forest being pursued by a wolf, she cannot resist fighting it for the flesh. But to do so, she must kill the predator and killing something so precious comes at a price.Dragged to a magical kingdom for the murder of a faerie, Feyre discovers that her captor, his face obscured by a jewelled mask, is hiding far more than his piercing green eyes would suggest. Feyre’s presence at the court is closely guarded, and as she begins to learn why, her feelings for him turn from hostility to passion and the faerie lands become an even more dangerous place. Feyre must fight to break an ancient curse, or she will lose him forever.

And finally, I have the best fiancé ever! He got me Sarah J Maas books to complete my collection along with two Disney DVD's.
Posted by Anya at 10:30