Weekly Highlights: the 'May TBR' edition 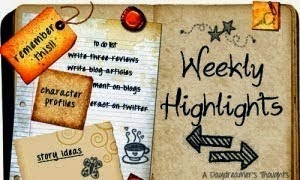 I haven't got much to report this week; I am officially job-less so a lot of time was spent job-hunting and application form-filling. I also watched too much TV and re-organised my room a couple of times. Again, some internet hugs would be much appreciated before I go crazy from boredom!

On My Bookshelf
The Diviners by Libba Bray

Evie O'Neill has been exiled from her boring old hometown and shipped off to the bustling streets of New York City--and she is pos-i-toot-ly thrilled. New York is the city of speakeasies, shopping, and movie palaces! Soon enough, Evie is running with glamorous Ziegfield girls and rakish pickpockets. The only catch is Evie has to live with her Uncle Will, curator of The Museum of American Folklore, Superstition, and the Occult--also known as "The Museum of the Creepy Crawlies."When a rash of occult-based murders comes to light, Evie and her uncle are right in the thick of the investigation. And through it all, Evie has a secret: a mysterious power that could help catch the killer--if he doesn't catch her first.

All The Bright Places by Jennifer Niven

Theodore Finch is fascinated by death, and he constantly thinks of ways he might kill himself. But each time, something good, no matter how small, stops him. Violet Markey lives for the future, counting the days until graduation, when she can escape her Indiana town and her aching grief in the wake of her sister's recent death.When Finch and Violet meet on the ledge of the bell tower at school, it's unclear who saves whom. And when they pair up on a project to discover the 'natural wonders' of their state, both Finch and Violet make more important discoveries: It's only with Violet that Finch can be himself - a weird, funny, live-out-loud guy who's not such a freak after all. And it's only with Finch that Violet can forget to count away the days and start living them. But as Violet's world grows, Finch's begins to shrink.

These two I treated myself to on my last day of work - The Diviners has been on my wishlist for about two years and All The Bright Places Jess recommended to me.

Murder Most Unladylike by Robin Stevens

Deepdean School for Girls, 1934. When Daisy Wells and Hazel Wong set up their very own deadly secret detective agency, they struggle to find any truly exciting mysteries to investigate. (Unless you count the case of Lavinia's missing tie. Which they don't, really.)But then Hazel discovers the Science Mistress, Miss Bell, lying dead in the Gym. She thinks it must all have been a terrible accident - but when she and Daisy return five minutes later, the body has disappeared. Now the girls know a murder must have taken place . . . and there's more than one person at Deepdean with a motive.Now Hazel and Daisy not only have a murder to solve: they have to prove a murder happened in the first place. Determined to get to the bottom of the crime before the killer strikes again (and before the police can get there first, naturally), Hazel and Daisy must hunt for evidence, spy on their suspects and use all the cunning, scheming and intuition they can muster. But will they succeed? And can their friendship stand the test?

We Are All Made of Molecules by Susin Nielson
Stewart is geeky, gifted but socially clueless. His mom has died and he misses her every day.

Ashley is popular, cool but her grades stink. Her dad has come out and moved out – but not far enough.Their worlds are about to collide: Stewart and his dad are moving in with Ashley and her mom. Stewart is trying to be 89.9% happy about it even as he struggles to fit in at his new school. But Ashley is 110% horrified and can’t quite get used to her totally awkward home. And things are about to get a whole lot more mixed up when they attract the wrong kind of attention. . .

And these two are from the staff room - Murder Most Unladylike I've heard loads of great things but have hesitated picking it up because it looked a little young. Am happy to be proved wrong! And We Are All Made of Molecules is Waterstones Loves for May, and sounds really sweet.

May TBR
My TBR shelf has gotten a little bit out of control again, so I will be dealing with that, starting with Finding Cherokee Brown then the rest of the Night School series. I also Nowhere But Here to read for review, which is due out early June. If you guys have any ideas of what I should bunk to the top of the pile, let me know!
Posted by Anya at 10:00