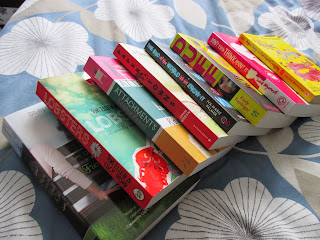 Sometimes we just need something funny, something out there and weird that makes us laugh. And as I'm struggling with the whole "adult life" nonsense, I thought I'd share my list of books that never fail to make me giggle.


1 - Angus, Thongs and Full Frontal Snogging - my all time favourite teen series, one that runs throughout my teen years. I once spit out water from laughing while reading this, and burst out laughing on a train station. That was awkward. 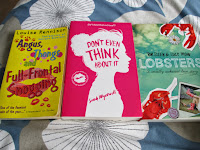 2 - Geek Girl - Harriet is funny without realising and the situations she finds herself in, especially modelling-wise, bless her, she is so out of her depth!

3 - Don't Even Think About It - a group of teens develop mind reading powers and can snoop in classmates and families heads? Yeah, it's kinda awkward and reveals some cringe-worthy secrets but God it was funny!

4 - Lobsters - Sam and Hannah's hit and miss story is heart warming and funny, mostly because it captures teenage life so well, especially that pressure to find The One 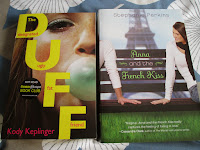 5 - The Duff - a bit more cynical than romantic but just as funny as any other teen rom-com. Bianca is a great heroine, doesn't take any crap, sarcastic and surprisingly soppy.

6 - Anna and the French Kiss - ah, St Clair. I almost don't need to say anything about Perkins' books. I love Anna and St Clair's story, it's funny and romantic and perfect.

7 - From What I Remember - the absolutely ridiculous tale of getting kidnapped to Mexico on the trail of the perfect graduation speech. So very funny, a little cringe-y with some awkward kisses and a run across the border thrown in. 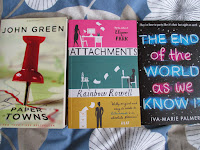 9 - The End of the World as We Know It - group if misfits try and survive an alien invasion with water pistols and inappropriate humour. Bring it on!

10 - Attachments - another rom-com of a book. I got my laughs imagining Lincoln's face as he read private and in-joke emails between two colleagues. It's a little awkward but you can't help rooting for Lincoln and Beth, even as he's snooping on her secrets.

Any of these on your lists too? Have I missed any? Let me know!
Posted by Anya at 09:00

Email ThisBlogThis!Share to TwitterShare to FacebookShare to Pinterest
Labels: discussion