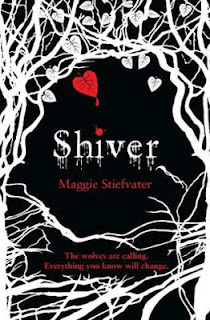 Publisher: Scholastic
Published: 1st August 2009
Pages: 438
Synopsis:
When a local boy is killed by wolves, Grace's small town becomes a place of fear and suspicion. But Grace can't help being fascinated by the pack, and by one yellow-eyed wolf in particular. There's something about him - something almost human. Then she meets a yellow-eyed boy whose familiarity takes her breath away...
A chilling love story that will have you hooked from the very first page.

Review:
I've heard plenty of good things about this series and have admired the covers for years. Then why did it take me so long to finally pick it up?

It tells of the bewitching love story between Grace and Sam. As a girl, Grace has watched with fascination the wolf with yellow eyes, to suddenly find him hurt on her doorstep. Embarking on a relationship that both knows will end badly, they also have to deal with a stupidly angry new wolf how refuses to accept his fate and put them all in danger. To put it lightly, I was gripped from page one!

It is beautifully written, with alternate chapters to get both Grace and Sam's perspective. Grace was easy to relate to, had problems with her parents, chatted to her friends, but was strangely obsessed with the pack of wolves after nearly being killed by them all those years ago. And Sam was adorable, sweet, feared he would literally lose himself when he changes into a wolf for the last time. My heart broke for him.

Along with secondary characters that engrained themselves in the story but did not distract, Grace and Sam fight to be together, to keep their secret safe and even try and find a cure for Sam's wolfism. Yeah, that's a word now.

I really fell in love with these characters. Coming across as so real, it was easy to get lost in the story, not seeing snow-covered woods and dark wolves outside! Completely gripping and touching love story, Shiver is an obsessive read.
Posted by Anya at 14:36