Thursday night saw Bath's Waterstones overrun with family and friends for Moira Young's launch party of Rebel Heart. Sophie was invited through her publishing contacts and, knowing how much I love the book, asked me to tag along. Duh! 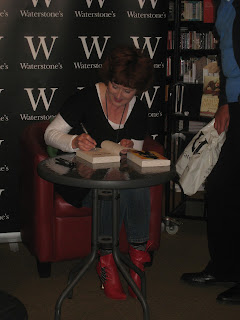 While waiting upstairs, we met a some awesome people, fellow readers and even two of Moira's nephews from London! Then we got started. Marion Lloyd, yes THE Marion Lloyd, introduced Moira and spoke a little about how she knew she wanted to publish Blood Red Road and how excited she was for Rebel Heart and how proud she was of Moira. It was all very heart-warming!

Moira then talked about Saba, DeMalo and her imagined landscape, based loosely on her childhood memories of holidaying around Canada. She said that Saba was getting to the point that she couldn't stop her, she was so out of control and complex. Moira also said that because of Saba's complexity, she needed an equally intriguing antagonist, someone who was appeared bad to the reader but at the same time, you could understand their motivations. Well that explains the drama of Rebel Heart!

Moira told us about her memories of summer holidays, how her mother could remember sombre stories of particular mountains, you know plane crashes and stuff. She also told the story of when she around 8 years old, they visited a village called Frank and one night in 1903, the little mining town was crushed under a limestone landslide and all little Moira could imagine was the village under her feet, still asleep in their beds. And her mother wonders where she gets her dark imagination from! 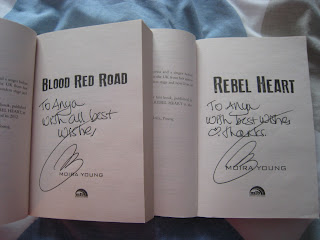 Moira read aloud the first page of Rebel Heart, beautifully I might add. Finally, Marion asked for some spoilers for the final book in the trilogy. I can unofficially reveal that Moira has titled it Raging Star, it apparently opens with a fight scene and, teasingly, Saba does something bad.

We then got our books signed, I actually managed to talk to her like a normal person and congratulated her! Although I didn't get a chance to say how awesome her shoes were. Then Sophie and I hung around to talk to Julia Green, also in attendance, as Sophie had meet her earlier in the summer. We also properly introduced ourself to Hannah, Sophie's contact from Scholastic, and - get this - she's actually heard of me! I was very, pleasantly, surprised!

All in all, a fabulous evening, we had loads of fun hearing about books and book news and meeting awesome people! Can't wait for what other events Waterstones has to offer!
Posted by Anya at 15:39