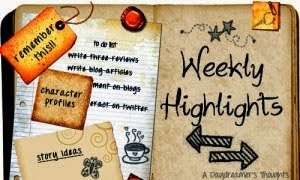 Jeez, it's March already? I've been at the new job a month now and I am really loving it! But with all the extra hours, my reading has suffered quite a bit, as well as the attention my blog is getting, so I apologise for that but I'm trying my hardest to find a new balance. But you know me, I still carry a book around everywhere anyway!

Currently Reading
Crush by Eve Ainsworth - it's a bit difficult to read but it's very interesting to see how she has portrayed such a horrible relationship. I'm hoping to finish it today and go on to Midnight Bites, details below.

Midnight Bites by Rachel Caine
MIDNIGHT BITES includes a total of more than 50,000 words of brand new content, which makes me very happy indeed (and I hope will also make you happy, too). From stories featuring our favorite bunny-slipper-wearing mad scientist to a mystery solved by police chief Hannah Moses, I think you'll find this is a diverse group of stories that will shine a little more light in the murkiest corners of Morganville.

The Sleeping Prince by Melinda Salisbury

Ever since her brother Lief disappeared, Errin's life has gone from bad to worse. Not only must she care for her sick mother, she has to scrape together rent money by selling illegal herbal cures. But none of that compares to the threat of the vengeful Sleeping Prince whom the Queen just awoke from his enchanted sleep.

When her village is evacuated as part of the war against the Sleeping Prince, Errin is left desperate and homeless. The only person she can turn to is the mysterious Silas, a young man who buys deadly poisons from Errin, but won't reveal why he needs them. Silas promises to help her, but when he vanishes, Errin must journey across a kingdom on the brink of war to seek another way to save her mother and herself. But what she finds shatters everything she believed about her world, and with the Sleeping Prince drawing nearer, Errin must make a heartbreaking choice that could affect the whole kingdom.

This and Midnight Bites I spotted in Waterstones and couldn't resist! I also picked up The Sin Eater's Daughter as I don't own a copy. Midnight Bites I have been waiting for ages for so yeah, reading asap!

The Girl of Ink and Stars by Kiran Millwood Hargrave

Forbidden to leave her island, Isabella Riosse dreams of the faraway lands her father once mapped.When her closest friend disappears into the island’s Forgotten Territories, she volunteers to guide the search. As a cartographer’s daughter, she’s equipped with elaborate ink maps and knowledge of the stars, and is eager to navigate the island’s forgotten heart.But the world beyond the walls is a monster-filled wasteland – and beneath the dry rivers and smoking mountains, a legendary fire demon is stirring from its sleep. Soon, following her map, her heart and an ancient myth, Isabella discovers the true end of her journey: to save the island itself.

Gorgeously wrapped and presented, this might sneak to the top of my TBR. Thank you Chicken House!

A Darker Shade of Magic by VE Schwab

Kell is one of the last Travelers—rare magicians who choose a parallel universe to visit.

Grey London is dirty, boring, lacks magic, ruled by mad King George. Red London is where life and magic are revered, and the Maresh Dynasty presides over a flourishing empire. White London is ruled by whoever has murdered their way to the throne. People fight to control magic, and the magic fights back, draining the city to its very bones. Once there was Black London - but no one speaks of that now.

Officially, Kell is the Red Traveler, personal ambassador and adopted Prince of Red London, carrying the monthly correspondences between royals of each London. Unofficially, Kell smuggles for those willing to pay for even a glimpse of a world they’ll never see. This dangerous hobby sets him up for accidental treason. Fleeing into Grey London, Kell runs afoul of Delilah Bard, a cut-purse with lofty aspirations. She robs him, saves him from a dangerous enemy, then forces him to another world for her 'proper adventure'.

But perilous magic is afoot, and treachery lurks at every turn. To save all of the worlds, Kell and Lila will first need to stay alive — trickier than they hoped.

This was 99p on Kindle and I couldn't resist.

Radio Silence by Alice Oseman
What if everything you set yourself up to be was wrong?

Frances has always been a study machine with one goal, elite university. Nothing will stand in her way; not friends, not a guilty secret – not even the person she is on the inside.

But when Frances meets Aled, the shy genius behind her favourite podcast, she discovers a new freedom. He unlocks the door to Real Frances and for the first time she experiences true friendship, unafraid to be herself. Then the podcast goes viral and the fragile trust between them is broken.

Caught between who she was and who she longs to be, Frances’ dreams come crashing down. Suffocating with guilt, she knows that she has to confront her past…
She has to confess why Carys disappeared…

Meanwhile at uni, Aled is alone, fighting even darker secrets.

Frances is going to need every bit of courage she has.
Ahh, I am so excited about this, I loved Solitaire and I can't wait to see how Oseman's writing as progressed. Thank you Harper Collins and Netgalley!

March TBR
Apart from the above, which I'm hoping to get to, I also have the Classics Challenge, which this month will be Pride and Prejudice. Plus a few review books: Love Song, South of Sunshine and The Appearance of Annie Van Sinderen. I'm honestly not sure how this is going to go, as with the new job reading hasn't happened much, so review books are being put at the top of the list.
Posted by Anya at 10:00