This Raging Light by Estelle Laure 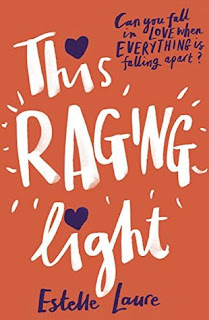 How is it that you suddenly notice a person? How is it that one day Digby was my best friend's admittedly cute twin brother, and then the next he stole air, gave jitters, twisted my insides up?


Lucille has bigger problems than falling for her best friend's unavailable brother. Her mom has gone, leaving her to look after her sister, Wren. With bills mounting up and appearances to keep, Lucille is raging against her life but holding it together - just.

A stunning debut to devour in one sitting, Laure captures completely the agony and ecstasy of first love.

For anyone who knows me, a contemporary romance like this, I should have been all over this. But for whatever reason, it took me a while to get into it properly. For one, I didn't like Digby. I think I need to fall in love with the love interest like the protagonist does and Lucille already had a secret thing for him so I didn't see that lovely progression.

Lucille was so strong for her little sister but stupid for Digby; I know that guys can turn your brain to mush but I was a little disappointed in her for messing that up. Also, I just didn't see it; yeah, he was there and he was sweet but he's the twin brother to her best friend, of course he's going to be nice! Plus he has a girlfriend, plans for the two of them! If he's so nice, why was he so easily swayed by the damsel in distress?

What I did love about this was Lucille's relationship with best friend Eden, and younger sister Wren. Lucille and Eden had such a brilliant, honest friendship, they were there for each other, no questions asked, and even with such a horrible situation as Lucille and Wren being abandoned by their mother, Eden was there, offering advice and support. And Lucille was so strong for Wren, doing everything she could to support her, give her some normalcy after so much crap. It was an utterly awful situation the girls were in and I really do commend Lucille for holding it together, having to be the adult way too young.

I have mixed feelings about this story. I ended up really liking it, the writing style was so easy to read, quite lyrical, and the characters were very realistic, but just something about the love story side of it was lacking. I did like how it ended, it was positive and reinforced the strength message that had been humming all through the story, and it showed how far Lucille had come without wrapping it up neatly, because their struggle wasn't over.

Published 14th January 2016 by Orchard Books. Thank you to the publisher and Netgalley for my copy in exchange for an honest review.
Posted by Anya at 09:00