A Midsummer's Nightmare by Kody Keplinger 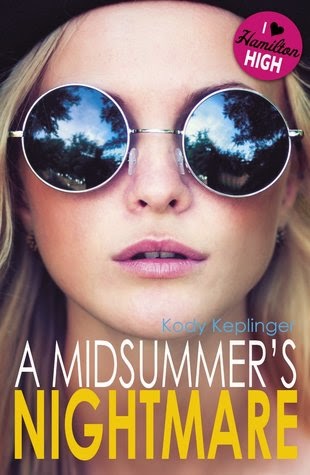 Whitley Johnson's dream summer of shopping, partying and tanning on the beach has just turned into a nightmare. Because Dad didn't tell her he doesn't live by the beach anymore, or that he's no longer a bachelor. He's picked up and moved to a tiny, lame town called Hamilton and gotten himself a fiance. A fiance whose son just happens to be what's-his-name from last week's drunken graduation party one night stand. Just freakin' great.

As if the summer couldn't get worse, Dad seems to forget Whitley's even there. She doesn't fit in with his perfect new country club family, and Whitley does what any kid lucky enough to go all summer unsupervised does: she parties. Hard.So hard that she doesn't even notice the good things right under her nose: a younger future step-sister who is just about the only person she's ever liked, a best friend (even though Whitley swears she doesn't 'do friends') and a smoking hot, sweet guy who isn't her step brother (yet) and who actually seems to care for her. It will take all three of them to convince her that they're not phoneys, and to get Whitley to get through her anger and begin to put the pieces of her family together.

I don't think I need to say much about how much I adore Keplinger's books that you haven't already heard. So I'm going to keep it short and sweet.