Uses For Boys by Erica Lorraine Scheidt - synopsis and author spotlight!
Another stop on the Uses For Boys blog tour. Big thank you to Shane for setting it up and all that! And don't forget to enter the giveaway for a signed copy of the book! 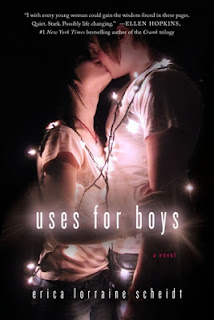 Anna remembers a time before boys, when she was little and everything made sense. When she and her mom were a family, just the two of them against the world. But now her mom is gone most of the time, chasing the next marriage, bringing home the next stepfather. Anna is left on her own—until she discovers that she can make boys her family. From Desmond to Joey, Todd to Sam, Anna learns that if you give boys what they want, you can get what you need. But the price is high—the other kids make fun of her; the girls call her a slut. Anna's new friend, Toy, seems to have found a way around the loneliness, but Toy has her own secrets that even Anna can't know.


Then comes Sam. When Anna actually meets a boy who is more than just useful, whose family eats dinner together, laughs, and tells stories, the truth about love becomes clear. And she finally learns how it feels to have something to lose—and something to offer. Real, shocking, uplifting, and stunningly lyrical,  Uses for Boys  is a story of breaking down and growing up.

When Erica was a kid all she did was write. She dropped out of high school and attended the Jack Kerouac School of Disembodied Poetics at Naropa University where she was surrounded by writers and artists.
But then, in Erica's early twenties, she got a job. She worked hard at that job for 15 years and didn't write a word.
Then this happened: Erica walked into a bookstore and bought two books by Francesca Lia Block. No particular reason, she just liked their covers. Then Erica read everything Francesca wrote. She read all the YA she could. She still does. Erica think's the world that happens between 13 and 17 is everything.
She quit her job. Studied writing. And then spent three and a half years writing Uses for Boys. Now she's working on a new novel and it's like falling down a hole. Writing her first novel taught her nothing about writing the next one.

a Rafflecopter giveaway
Posted by Anya at 12:00