The Immortal Rules by Julia Kagawa 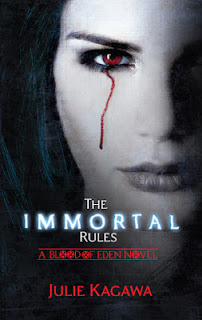 Published: 4th May 2012
Pages: 485
Synopsis:
"In a future world, vampires reign. Humans are blood cattle. And one girl will search for the key to save humanity."Allison Sekemoto survives in the Fringe, the outermost circle of a vampire city. By day, she and her crew scavenge for food. By night, any one of them could be eaten. Some days, all that drives Allie is her hatred of "them." The vampires who keep humans as blood cattle. Until the night Allie herself is attacked--and given the ultimate choice. Die...or become one of the monsters.
Faced with her own mortality, Allie becomes what she despises most. To survive, she must learn the rules of being immortal, including the most important: go long enough without human blood, and you will go mad.

Review:
I don't even know how to start reviewing this book, it had so much depth and action in it, plus it was incredible!

I guess first off we'll discuss the whole vampire society that Julie has created; it is a very interesting and obviously fresh idea to add to the already diverse vampire legend. The plague that wipes out humans and vampire alike, forcing them to co-exist in heavily controlled cities is a story completely new and completely fascinating. All lose seams pulled together to create a world of vampires and rabids that made it seem possible, which is scary.

I simply loved Allie. She was a truly amazing heroine: strong and brave, willing to do anything, even turn into the thing she hates most, to survive. She was kick-ass, stubborn, a little bit stupid but most importantly, naive to think she could hold on to her humanity, no matter what Kanin said otherwise. I knew something bad would happen to shake her faith but luckily, something also happened to bring it back.

Kanin was the typical bad-ass vampire master which should have felt clichéd but just made it seem more natural: of course we expect vampires to act like cold-hearted demons that cannot form facial expressions! Another thing was the band of humans, Zeke in particular, looking for a safe haven and instead came across a vampire with identity issues. I loved Zeke and his and Allie's love story was one that I rooted for right at the beginning.

Things didn't happen the way I thought they would, for which I am glad. I loved the twists Julie created, the role reversal with Allie saving the guys and falling for a human. Practically everything that I love in a book was included in The Immortal Rules and even its length could not be considered daunting!
Posted by Anya at 11:53