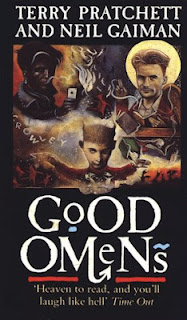 Publisher: Corgi
Published: 1st August 1991
Pages: 382
Synopsis: According to the Nice and Accurate Prophecies of Agnes Nutter--the world's only totally reliable guide to the future--the world will end on a Saturday. Next Saturday, in fact. Just after tea...


Review:
I simply adore Pratchett's writing and I've been slightly obsessed with Neil Gaiman since he wrote 'The Doctor's Wife', my favourite ever episode of Doctor Who. But's that's neither here nor there. This pair of writers can only mean good things!

It's a great new spin on the old apocalypse - Pratchett can always manage to bring laughter to any situation, even the end of the world. Their world is written well and complex, with little characters becoming important and some characters so good you couldn't forget them if you tried. You do have to pay attention to subtle jokes you have to re-read to understand and small details that become important later. I love how the little details become part of the big picture but it does make it a complicated book to read. Worth it though!

Some highlights for me include the conversations between Azriaphale and Crowley, the angel and demon that have known each other for so long, they don't even know why they are on different sides. Adam Young, the terribly young Antichrist, was actually adorable and a little bit stupid but the kind of stupid that is just innocent ignorance. The side characters, like the other Four Horsemen of the Apocalypse, were incredibly funny, had some awesome lines and integrated so well into the story I'm a little envious that I can't write like that!

All in all, such a good book. Admittedly I struggle with Pratchett's writing but that doesn't mean I enjoy it any less, it just takes me longer to read it. If the end of the world had to happen any way, I would love it to be like this!
Posted by Anya at 10:34