Publisher: Norton and Company; Norton Critical Edition
Published: 1818 text, edition published 1996
Pages: text: 156, plus critical essays: 334
Synopsis (according to Goodreads):
At once a Gothic thriller, a passionate romance, and a cautionary tale about the dangers of science, Frankenstein tells the story of committed science student Victor Frankenstein. Obsessed with discovering the cause of generation and life and bestowing animation upon lifeless matter, Frankenstein assembles a human being from stolen body parts but; upon bringing it to life, he recoils in horror at the creature's hideousness. Tormented by isolation and loneliness, the once-innocent creature turns to evil and unleashes a campaign of murderous revenge against his creator, Frankenstein. 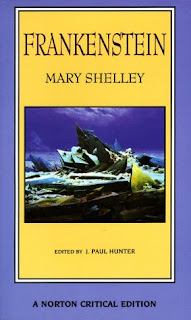 Review:
Despite all the expectations and stereotypes of Frankenstein, I did not know what to expect from this book. And yet, I really enjoyed it, much more than I thought I would. There were obvious Gothic elements, which is why I was reading it in the first place, like the Sublime description of the mountains, the far away and foreign element of the setting, the alien and terrible nature of Frankenstein's experiments etc..

I really liked the story, even though it was fairly predictable: the story of a young man, aiming to do good in his field of medical and anatomy, only to hate what he has created, how it destroyed his life and livelihood. Some of it was predictable, probably because I expected it, and some parts did annoy me, like how feminine Victor Frankenstein was sometimes. But the monster's story was actually a little bit heartbreaking; it was awful how cruel the human kind can be with things they do not understand. But it was a little annoying as to how well spoken the monster was - or maybe I just expected him to only be able to say 'urg'.


Even the language of the novel was not too much to put me off, like some other books for this module I've tried to read. Easy to read, easy story to understand and follow along, I enjoyed it enough to recommend it but will admit that it is not for everyone - especially someone expecting the gore and violence that typically comes with the image of Frankenstein.
Posted by Anya at 10:02