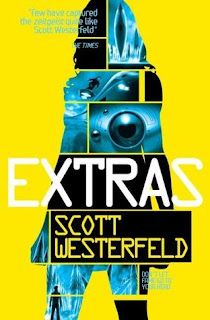 Publisher: Simon and Schuster
Published: 2nd October 2007
Pages: 417
Synopsis:
It's a few years after rebel Tally Youngblood took down the uglies/pretties/specials regime. Without those strict roles and rules, the world is in a complete cultural renaissance. "Tech-heads" flaunt their latest gadgets, "kickers" spread gossip and trends, and "surge monkeys" are hooked on extreme plastic surgery. And it's all monitored on a bazillion different cameras. The world is like a gigantic game of American Idol. Whoever is getting the most buzz gets the most votes. Popularity rules.
As if being fifteen doesn't suck enough, Aya Fuse's rank of 451,369 is so low, she's a total nobody. An extra. But that's just until she gets to kick a good story for herself.
Then Aya meets a clique of girls who pull crazy tricks, yet are deeply secretive of it. Aya wants desperately to kick their story, to show everyone how intensely cool the Sly Girls are. But doing so would propel her out of extra-land and into the world of fame, celebrity...and extreme danger. A world she's not prepared for.

Review:
It's been a few years since Tally saved/screwed up the world with what Aya's city calls the mind-rain, which means we actually get to see the after effects of the 'happily ever after' if you will. It's very interesting to the after effects, you know see humanity scrambling for answers. With Aya's commentary, you see that the world really was confused, which is not all that surprising, trying to figure out how to cope. What is surprising, at least to me, is what they decide to do with it: have a reputation economy. This was simply fascinating. Weird and a little confusing at first but actually really clever! Another cruel twist of Westerfeld's on our real-world ideals and morphing them beyond belief!

Aya reminded me of Tally but, I feel awkward to say, easier to like. Like Tally, Aya was somewhat naive and wanted what everyone else wanted, which in this case was to be famous. I also liked Aya and Frizz's relationship more than Tally and Zane's. Even though there was the same minimal build-up and practically instanta-love, I felt that Frizz had more depth to him, a little more explanation and exploration into his character than we got with Zane.

Now, onto the plot itself. Westerfeld really pulled out all the stops for this final instalment of the Uglies-verse. First the Sly Girls then these amateur aliens! Always left me guessing! Set in a different city, it was a completely different culture, not just because of the impact the mind-rain had. I don't want to give too much away, at least not more than I already have! So I will conclude. Westerfeld paced this exciting adventure with touching stories of friendship and even a few old faces!
Posted by Anya at 14:26