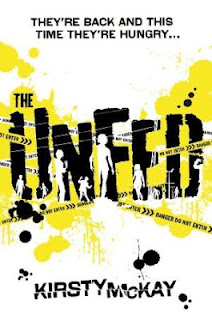 Publisher: Chicken House
Published: 6th September 2012
Pages: 307
Synopsis:
The good news: Bobby survived her Undead school trip. Bad news: her best mate, Smitty, is missing. Bobby knows she's got to find him even if it means risking it all and going out into the starving-zombie-infested wastelands again. Even if it means taking fellow survivors including a couple of old frenemies along for the ride. And even if the zombies are not the only ones who are chasing them this time.

Review:
Ever since I read Undead, all those months ago, I have never looked at school trips the same way! Unfed promised to be just as exhilarating and terrifying as its predecessor and I could not wait - I read it in two days!

It began six weeks later. Bobby's just come out of a coma after the rescue bus crashed, Smitty's gone missing and the rest of the gang, along with newcomer Russ, are stuck in a zombie-infested military (or possibly Xanthro) hospital, cut off from the rest of the world. Scary for different reasons, they try to escape and figure out just what the hell has happened to them, while fighting off creepily clever zombie kids.

Kirsty McKay's characters are incredible. Told from Bobby's perspective again, we feel her anger and fear as clearly as it was happening to us. Actually, I would not be as capable in a zombie apocalypse as she is! Alice was just as reluctant, Pete was as fascinated with the details as before and don't forget the strangely capable Russ, who I really was not sure about. But let's not go into that. There was also a distinct lack of Smitty for the first half, whom I missed, but once he returned, he was just annoying and reckless as before, making me wonder what I ever saw in him. But he has his moments!

As well as the characters, there is of course the amazing writing of wit and humour and, obviously, the definite gross details of the zombies made to be weapons by the evil company Xanthro. With the added grossness of decaying zombie cows and a redhead girl who apparently woke up half way through her autopsy. *shudder*

An amazing twist ending, just to keep us interested (as if I wasn't!), with the promise of more disgusting adventures to come.

This copy was sent to me by Chicken House publishing. Thank you!
Posted by Anya at 12:04