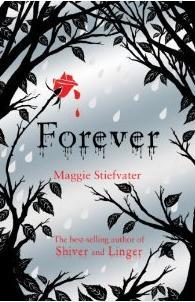 Publisher: Scholastic
Published: 1st January 2011
Pages: 496
Synopsis:
Sam has always loved Grace. As a wolf, he watched her from afar. As a boy, he held her in his arms.
Now facing the possibility of a life without her, he will do anything to keep her safe. Even if it means facing his demons. Even if it risks everything he has.
Anything, as long as their love can survive...

Review:
This epic finale threatened to rip my heart out. Even though I did not connect with some of the characters the way I wanted to, I still felt for all of them. Especially Sam. He had some issues to go through after some truths came out about Beck. Do not make me hate Beck! It is impossible!

Maggie's writing style kept me entranced, its heartfelt and lyrical prose lulling me into her world of wolves. The multiple narrative as well adds to the strong characterisation that makes this series so brilliant. Isabel and Cole really come into their own in Forever; their parts are crucial for the continuation of the pack and for Sam and Grace. Though a little hard to understand, they both are amazing characters and I really felt for them.

Because this book was more about the wolves as a pack, it did not deal with Sam's 'demons' and his relationship with Grace as much as I'd thought. Giving equal page space to Isabel and Cole worked for the plot and the story as a whole, especially considering what Cole did for the wolves, but I am a romantic and just wanted a happily-ever-after for Sam and Grace.

I can't say too much about the story without giving so much away, but I will say how much I love Sam and Grace's relationship. Even though they were separated, not through choice, for plenty of parts of this book, they were still so in balance and respectful of each other while still being teasing and young.

My heart was in my throat for the last final push of the story - let's just say things did not happen the way I thought they would, though not that all of those surprises were necessarily bad. The ending is not one you'd expect - and did not exactly leave me happy - but gives an air of hope to Sam and Grace's relationship.
Posted by Anya at 12:12