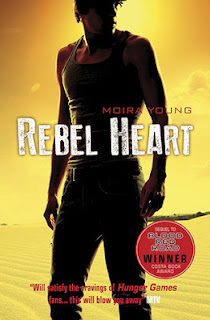 Publisher: Marion Lloyd Books
Published: 2nd August 2012
Pages: 393
Synopsis:
Saba has rescued her kidnapped brother and defeated the fanatical Tonton. But the price to be paid for her violent victory is terible. Jack has disappeared – and can no longer be trusted. A new and formidable enemy is on the rise in the dustlands. No one is safe. And Saba must confront the terrible secret hidden in the darkest depths of her soul.

Review:
Following up the intense and action-filled Blood Red Road, Rebel Heart did not stop for a moment. Saba's voice was just as beautiful and awkward as I remembered it, only this time, Saba's broken. She's tormented by the ghosts of the dead and she can't help herself. She needs Jack. But Jack isn't where he said he would be, then they hear news that he's joined the Tonton. He can't be trusted. Along with the return of DeMalo, Saba's new start for her family was looking even less likely.

Jack quite simply broke my heart. All I wanted was a happy ending for both of them and even my pure romantic notions couldn't fathom how that was going to happen. And even baring in mind that Saba's haunted, she made some... interesting choices that confused me and even made me angry on a few occasions. But now I'm just worried what these choices mean for Saba and Jack's future. Not to mention Tommo!

Even though, as a general rule, I don't like sequels very much, Rebel Heart was just as fast-paced and gut-wrenchingly heart-felt as Blood Red Road. Highly recommended. Simple as that.
Posted by Anya at 14:51