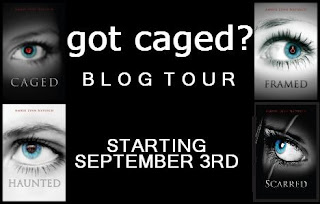 As part of her blog tour for her fourth book in the Caged series, Scarred, coming out in e-book on 24th September, I am honoured to welcome Amber Lynn Natusch! Enjoy!

When I was asked to compose a guest blog post, I had no idea what to write. As an author, it was an especially low moment. Then a great friend suggested that I take an excerpt from the first novel in my series, Caged, and explain what I loved about it. Genius! Times like this illustrate my need for a team of levelheaded people around me―an entourage of rational thinkers.
The unfortunate reality for me was that my favorite scenes from Caged all contain spoilers, but I still managed to find some good ones :)
For this blog, I chose a scene that highlights one of the two mysterious men that Ruby finds herself caught between. They both have alluring qualities, but are equally shrouded in lies, leaving Ruby to sort through them on her own. Getting a straight answer is completely out of the question as you will soon see.
Without further ado, I give you Ruby, Sean, and Eric, in the notorious club scene.

His face was close, breathing my air.  Every time I made eye contact with him, I lost myself in the most literal sense.  I said things I'd neversaid before, and did things I would never have done; I was a completely different person.  I was so influenced by his energy, his power, asif it was seeping out of him and into me.  I knew I could sense the feelings of others as well as I could my own, but this was entirelydifferent and new.  The feeling was heightened exponentially with eye contact so I tried my best to avoid it. I did an amazingly poor job ofit.
I heard a voice from behind me but didn't acknowledge it until a hand clamped down onto my arm and jerked me around in a not-so-friendlyway. Sean's look was murderous.  He was visually communicating his desire to creatively remove certain body parts from the guy he'd justpeeled me off of, making sure the process was intolerable.  There was something personal about his stare, like the two had been at acrossroad before.
"Do you two know each other?" I asked, not really expecting an honest answer. I needed to diffuse the situation before the pissing contestgot any more heated.  The man laughed and said nothing.  I abruptly turned to look at Sean, not sure how he would react to the man'sexpressed humor with the situation. He did nothing but stare him down.
"You never truly know anyone, Ruby," he said, calmly.  "But no.  I don't know him."
Sean's emphasis on the word "him" seemed strange, but so was Sean sometimes.  I shrugged as I audibly exhaled.  Boys can be so tryingsometimes.
I looked back at the man causing such a clear air of tension between them. I wanted to know who he was.  However, as soon as I lookedat him I no longer cared, I just wanted to be with him regardless of the cost.
"I'm Eric," he said without being prompted.
"Ruby," I managed as I struggled against Sean's very strong grip to get closer to Eric.
"We're leaving," Sean stated as he whirled me around and marched me towards the door.  My feet barely made contact with the floor and Irealized he'd picked me up around the waist to drag me out of the dance hall.  Eric followed closely behind with a wickedly amused lookplastered all over his face.  The situation was more personal than either of them was letting on and I was furious at being in the dark aboutsomething that so clearly involved me.
Sean stomped through the lobby, pushing through innocent club goers with no regard.  As we broke through the front door, Eric slipped asmall piece of paper into my hand as Sean continued on towards the parking lot.  He didn't see me take it so I managed to quickly slip itinto my shirt and down my bra even with the restricted range of motion I had in my arm. I doubted that Sean would strip search me to findit even if he had seen what I did.  Eric slipped out of sight into the bar while I continued to be hauled away like luggage to the car.
"I'm quite capable of walking, you know," I said with as much ferocity as I could muster.
"I've seen what you're capable of tonight," he scoffed.
"Why are you so angry with me?" I asked trying desperately to figure out what offense of mine he'd suffered.
"It's nothing," he answered.
"Nothing?  This is how you act about nothing?  Remind me never to do something to you then, because I shudder to think what yourreaction would be to that," I said, trying to wiggle away from him.