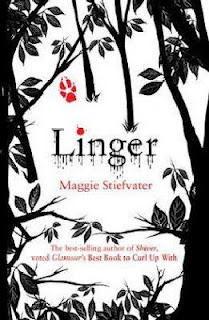 Publisher: Scholastic
Published: 20th July 2010
Pages: 420
Synopsis:
Grace and Sam must fight to be together. For Grace, this means defying her parents and keeping dangerous secrets. For Sam, it means grappling with his werewolf past ...and figuring out a way to survive the future.
But just when they manage to find happiness, Grace finds herself changing in ways she could never have expected...


Review:
Following on from the practically heartbreaking love story of Grace and Sam, this time it's Grace in trouble. With Sam cured, for now, of his wolfism, he now has new wolves to deal with, especially Cole: the new ridiculously insane wolf with more issues than Sam - why in the heck did Beck pick him? I like Cole but he does seriously annoy me, in a playboy but so messed up kinda way. As head of the pack without shifting, Sam is going through some stuff that he didn't think would ever happen: he's growing up. Not only that, but as Sam is beginning to understand his permanently human form, Grace is slowly losing control of hers.

It's not just the wolves Grace and Sam have to contend with, it's also Grace's parents. The initial shine they had for Sam has gone, and they no longer trust Grace to make decisions as a young adult. Her parents really annoyed me and I agreed with Grace when she said they can't just change between room mates and parents when they feel like it.

Different voices, not just Sam and Grace, added to the dynamic between characters and to get a better understanding of their motivations. Although, I'm going to be honest, I still have no idea what Isabel and Cole are thinking, even when inside their head! Maggie made sure it didn't get confusing with four voices, all with individual problems and issues to deal with that added up to the overall impact of the story.

I knew the book was going to end the way it did. It didn't take the suspense out though; in fact, it just made me not want the ending even more! Part two of Grace/Sam was not as... strong as the first but definitely worth it to get some answers about the wolves and to get a step closer to a possible happy ending for a perfect couple.
Posted by Anya at 10:48