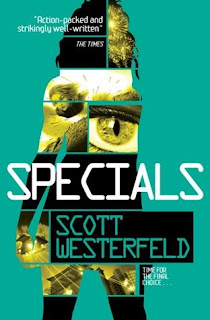 Publisher: Simon and Schuster
Published: 9th May 2006
Pages: 372
Synopsis:
Tally thought they were a rumor, but now she's one of them. A Special. A superamped fighting machine, engineered to keep the uglies down and the pretties stupid.
But maybe being perfectly programmed with strength and focus isn't better than anything she's ever known. Tally still has memories of something else.
But it's easy for her to tune that out--until she's offered a chance to stamp out the rebels of the New Smoke permanently. It all comes down to one last choice: listen to that tiny, faint heartbeat, or carry out the mission she's programmed to complete. Either way, Tally's world will never be the same.

Review:
Definitely not where I thought this series was going! The Special Circumstances have always been portrayed as this weird secret club, like a militia. And I've always thought of them as the bad guys. So, how does it work that Tally is made into one of them? With someone we know on the inside, we see that the Specials are still cruel and vain but also the city's defences, even if sometimes it's against themselves.

The Cutters seriously scared me in this one. Even with the bubbly or icy feeling, I just could not understand how Westerfeld glorified self-harming. Add that to Shay's weird mix of emotions, Zane's quick dismissal by Tally, David's absence for most of the book and Dr Cable's world crumbling way too quickly, and you get a somewhat disappointing conclusion to what has been an incredible journey for these characters.

Once again, I had issues with Tally. How can this character be so amazingly annoying but such a Mary Sue at the same time? She kept on showing how flawed her way of seeing the world was, how stunningly beautiful it was to be a Special. And even though she had been through so many surgeries to get her to see this way, she could still 'cure herself'. I get that its part of the plot line that she overcomes this Special-head way of thinking but I don't think she did. I'm going to stop on the unfairness of it all before I go off on one!

One more thing: the cure. While I knew that it was morally wrong for Dr Cable to be putting lesions in kids brains, I also understood her reasoning. Without them, they ruined the world. Diego was both amazing and terrifying, a mix of brilliant freedom and an awful lack of limitations. It is normal to us, dismissing the whole snakes for fingers thing, to see such a wild world but Tally knew that it could so easily get out of control.

And so the ending: for no apparent reason, I felt a sense of completion with Tally's cured Specialness. Don't get me wrong, I didn't understand it, but it was kind of a nice feeling, knowing that Tally and David would be there, like some secret heroes, protecting the world from themselves.
Posted by Anya at 10:57