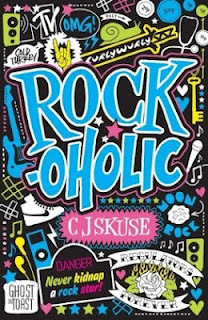 Publisher: Chicken House
Published: 1st March 2011
Pages: 368
Synopsis:
She's got it bad, and he ain't good -- he's in her garage? Gonna have to face it: Jody's addicted to Jackson Gatlin, frontman of The Regulators, and after her best bud Mac scores tickets, she's front and center at his sold-out concert. But when she gets mashed in the moshpit, loses her precious moon rock, and bodysurfs backstage, she ends up with more than a mild concussion to deal with. By the next morning, the strung-out rock star is coming down in her garage. Jody -- oops -- kind of kidnapped him. By accident. And now he doesn't want to leave. It's a rock-star abduction worthy of an MTV reality series . . . but who got punk'd?

Review:
I'll admit, the first few pages were rocky for me - it took me a while to get to grips with Jody's unique teenage-speak. Plus, the opening setting was Grandad's funeral, which was sad even before I got to know him. But I shook that off quickly, thankfully, as Jody's story was incredible. I completely fell for her, the way she wanted to honour her grandad's memory, the way she was so out of it in love with Jackson's image - she just knows he's the one for her. You know, how we've all felt at some point or another about a celebrity. I had no idea how crazy she was, didn't understand how you could kidnap someone by accident, but oh my God, she did!

Jody was real; she hated her body but knew her limitations, she had the typical teenage delusions about her hero, was madly in love with a PR image that she'd never met. She also tended to be a little impulsive, to the point of stupidity. The aftermath was usually messy. And also usually cleaned up by best friend Mac, who is an incredible singer, possibly but not gay, and a lovely big brother to the adorable Cree.

Finally, the Rock God himself. Jackson was not-quite-beautifully flawed. It was obvious he was spoilt, used to the rock star lifestyle and that made him so annoying. Not to mention his drug habit, which made him a little bit stereotypical but at least CeeJay didn't brush over the harsh reality of its effects.

The thing with this book was I never really knew what was going to happen. Jody's impulsiveness I guess. So while I was sometimes scared to turn the page, that didn't stop me devouring this book, laughing out loud and tearing up a few times too.
Posted by Anya at 16:41