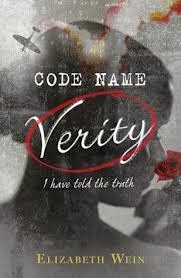 I have two weeks. You’ll shoot me at the end no matter what I do.That’s what you do to enemy agents. It’s what we do to enemy agents. But I look at all the dark and twisted roads ahead and cooperation is the easy way out. Possibly the only way out for a girl caught red-handed doing dirty work like mine — and I will do anything, anything, to avoid SS-Hauptsturmführer von Linden interrogating me again.He has said that I can have as much paper as I need. All I have to do is cough up everything I can remember about the British War Effort. And I’m going to. But the story of how I came to be here starts with my friend Maddie. She is the pilot who flew me into France — an Allied Invasion of Two.We are a sensational team.

A Flight Operative, code name Verity, crashed in Nazi-occupied France and was captured as a spy. Interrogated and tortured as an English spy, which annoys her beyond belief because she is Scottish, the narrative consists of her letters to herself, her confession, part of the deal she made with her interrogator in return for her clothes. As she says, it seems petty but it was easy. As I read more about Verity's betrayal of her country, I felt so bad. Then I realised, goodness knows why it took me so long, Julie can't tell the truth, it's being read by the bad guy!

It was so very clever, the way that Verity (Julie) told the truth without really telling them anything. Of course, as the clues piece together, you realise why she is so good at this but I was still incredibly impressed with her bravery and skill at playing them. Most of these clues some in the second part, narrated by another character, code name Kittyhawk. Her narrative was like the final piece of the puzzle and everything made sense and I felt awful for doubting Julie's integrity and skill but also incredibly moved by her story and proud of her for keeping it all together.

This is such an amazing example of historical fiction and why I love the genre; all the details of the planes, airfields and bunkers were very believable, it was frightening with the threats of torture and of dropping bombs, and so beautifully written, even with the odd switching between tenses and past/present. Amazingly, I followed it; Julie's letters were essentially her talking to herself and the changing tenses and perspectives was her making sense of the story, spinning it for her interrogators.

The story that Wein told was absolutely heartbreaking at times; I could not believe how much these two girls, so completely different, cared so much for each other and how much I adored them both. Yet it was still so funny! Even in the midst of torture and near-death experiences, both Julie and Maddie managed to keep smiling. The strength of their friendship was beautifully crafted and their story was gut-wrenching. Honestly, if you haven't read this book by now, what the heck are you waiting for?