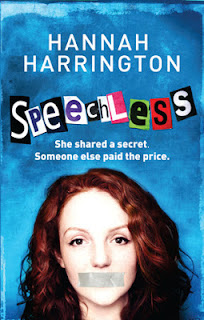 Publisher:  Mira Ink
Published: 7th September 2012
Pages: 288
Format: ebook
Synopsis:
Everyone knows that Chelsea Knot can’t keep a secret
Until now. Because the last secret she shared turned her into a social outcast—and nearly got someone killed.
Now Chelsea has taken a vow of silence—to learn to keep her mouth shut, and to stop hurting anyone else. And if she thinks keeping secrets is hard, not speaking up when she’s ignored, ridiculed and even attacked is worse.
But there’s strength in silence, and in the new friends who are, shockingly, coming her way—people she never noticed before; a boy she might even fall for. If only her new friends can forgive what she’s done. If only she can forgive herself.

Review:
Speechless is a story about a girl who can't keep her mouth shut telling a secret that nearly costs someone their life. Granted, she was drunk and shocked, but I kind of hated her a little when she spilled the secret. And I definitely hated the rest of them after what happened next. After this huge event that rocked the high school and the town, Chelsea takes a vow of silence.

I didn't know what to expect from this book, having never read anything by Harrington before but it was surprising how much I loved it. It was very open about the concept of bullying, the effects of witnessing it from both sides and how much it can hurt. Trust me, I know all too well the world Harrington captured perfectly. Chelsea came off as incredibly shallow at first, I really disliked her, but after she did the right thing of telling and after she was shunned from her "perfect" world and realised it was all hurtful gossip and back-stabbing, she began to behave like a real person and I really liked her.

After her vow of silence, she gets a lot of crap from students and teachers alike. But even though she nearly loses it a couple of times, I definitely would have, she just grows a tougher skin and learns to deal with it. The friendships she makes because of this, because she lost her superficial nature, are just brilliant. Asha is adorable and really sweet, Sam is the perfect geek - kinda love him! The sense of family she finds at Rosie's diner was exactly what Chelsea needed to feel like she was doing the right thing. After the days and weeks past, I wondered what it would take for Chelsea to speak again, and what did I wasn't expecting but at the same time, I wasn't surprised.

Although the main topic was bullying, Speechless also dealt with friendships and love, making it a really thorough and thoughtful read.

This counted towards my ebook challange. Thank you to Mira and netgalley for my copy
Posted by Anya at 14:04