Dance the Moon Down by R.L Bartram 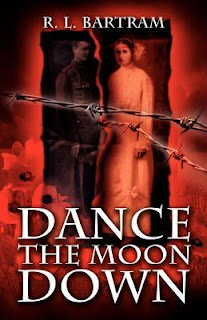 Publisher: Author's Online
Published: 4th November 2011
Pages: 300
Synopsis:
In 1910, no one believed there would ever be a war with Germany. Safe in her affluent middle-class life, the rumours held no significance for Victoria either. It was her father's decision to enroll her at university that began to change all that. There she befriends the rebellious and outspoken Beryl Whittaker, an emergent suffragette, but it is her love for Gerald Avery, a talented young poet from a neighbouring university that sets the seal on her future. After a clandestine romance, they marry in January 1914, but with the outbreak of the First World War, Gerald volunteers but within months has gone missing in France. Convinced that he is still alive, Victoria's initial attempts to discover what has become of him, implicate her in a murderous assault on Lord Kitchener resulting in her being interrogated as a spy, and later tempted to adultery. Now virtually destitute, Victoria is reduced to finding work as a common labourer on a run down farm, where she discovers a world of unimaginable ignorance and poverty. It is only her conviction that Gerald will some day return that sustains her through the dark days of hardship and privation as her life becomes a battle of faith against adversity.

Review:
Dance the Moon Down, randomly titled but never mind, is the story of Victoria and her life after her husband goes off to fight in the First World War. As noted in the Author's Notes, not much thought is given to those left behind in the world wars and I think it is an important part of our history, you know how we coped as a country - or not, as the case may be.

This is typical historical fiction, fully immersing the reader in the world of suffragettes, rations, politics and manners. Bartram uses an interesting story-telling style, beginning at the end, as it were. Victoria, an old lady of 60, is watching tourists at her village monument and remembers her husband. She tells the story as if remembering it and living it at the same time. Well written, I might add, as I completely forgot she was supposed to be looking back most of the time! The story spans the whole four years, which makes it interesting to see how Victoria and her quest developed alongside the war efforts.

Victoria and Gerald, who met at university, were only married less than a year before war broke out and Gerald went off to fight for his country. I didn't really fall for Gerald, maybe because it was written kind of fast or because they were together for such a short time before he was shipped off to war. Anyway, Victoria is relentless in her quest to find out what happened to him after he stops writing to her, which leads her to the War Office - where she was tempted to stray, and honestly I didn't like her for that. But after she runs out of money and has to sell her cottage, she ends up working on a farm. There, she quickly loses her high-strung attitude and realises what it's really like for the women left behind and the people who were not as lucky as her in life.

Although this might not be for everyone, as it is an adult novel, it is a touching tale of never-ending love and the tough times of war. Bartram does a fantastic job of weaving the love story and the horrors of war leaking back into England. All in all, a well-worth read for any fan on the genre.

This went towards my genre variety challenge. And thank you to the author for the copy.
Posted by Anya at 10:00