My own version of IMM and Letterbox Love. I've been trying to cut down on the books I buy, so these may be more spread out, at least until May when I hand in my dissertation and have nothing else to do! 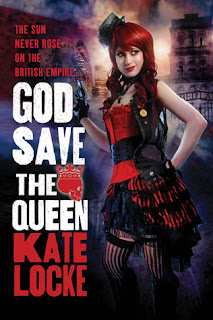 God Save the Queen by Kate Locke
The Year is 2012—and Queen Victoria still rules with an immortal fist.
She's the undead matriarch of a Britain, where the Aristocracy is made up of werewolves and vampires, where goblins live underground, and mothers know better than to let their children out after dark. A world where technology lives side by side with magic, where being nobility means being infected with the Plague (side-effects include undeath) and Hysteria is the popular affliction of the day.
Xandra Vardan is a member of the elite Royal Guard, and it's her duty to protect the Aristocracy. But things get complicated when her sister goes missing. Xandra will not only realise she's the prize in a dangerous power struggle—but she'll also uncover a conspiracy that threatens to topple the empire itself.

A present from Sophie, along with its sequel. Thank you Sophie, it looks awesome!

Ebooks
The Change by Angela White (free)
500 Years into the future, nine of every ten babies conceived are female. Men have been enslaved for their own protection and the only way to get a mate is to enter the Network Games and fight for one. The catch? It's a live battle to the death and the competition is fierce.

Hopeless by Colleen Hoover
Sometimes discovering the truth can leave you more hopeless than believing the lies…That’s what seventeen-year-old Sky realizes after she meets Dean Holder. A guy with a reputation that rivals her own and an uncanny ability to invoke feelings in her she’s never had before. He terrifies her and captivates her all in the span of just one encounter, and something about the way he makes her feel sparks buried memories from a past that she wishes could just stay buried.Sky struggles to keep him at a distance knowing he’s nothing but trouble, but Holder insists on learning everything about her. After finally caving to his unwavering pursuit, Sky soon finds that Holder isn’t at all who he’s been claiming to be. When the secrets he’s been keeping are finally revealed, every single facet of Sky’s life will change forever.

Blood Calling by Joshua Grover-David Patterson
Lucy Leary's eighteen year old life is a wreck. Her parents divorced, she's earned a DUI, and her grandfather has died. He left her a single possession: A vampire slaying kit with a note that says, "They're real. Fight them."Lucy finds answers in a place she never expected--the homeless shelter where she has to perform her community service. The Sundown Shelter is only open at night, and the man who runs it disappears during the day. But digging into the truth is dangerous. What Lucy learns will force her to abandon her life and confront an ancient vampire out to get her family.

Existence by Abbi Glines
Seventeen year old Pagan Moore has seen souls her entire life. Once she realized the strangers she often saw walking through walls were not visible to anyone else, she started ignoring them. If she didn't let them know she could see them, then they left her alone. Until she stepped out of her car the first day of school and saw an incredibly sexy guy lounging on a picnic table, watching her with an amused smirk on his face. Problem is, she knows he's dead.Not only does he not go away when she ignores him, but he does something none of the others have ever done. He speaks. Pagan is fascinated by the soul. What she doesn't realize is that her appointed time to die is drawing near and the wickedly beautiful soul she is falling in love with is not a soul at all.He is Death and he's about to break all the rules.

The Eternity Cure by Julia Kagawa (netgalley)
In Allison Sekemoto's world, there is one rule left: Blood calls to blood She has done the unthinkable: died so that she might continue to live. Cast out of Eden and separated from the boy she dared to love, Allie will follow the call of blood to save her creator, Kanin, from the psychotic vampire Sarren. But when the trail leads to Allie's birthplace in New Covington, what Allie finds there will change the world forever-and possibly end human and vampire existence. There's a new plague on the rise, a strain of the Red Lung virus that wiped out most of humanity generations ago-and this strain is deadly to humans and vampires alike. The only hope for a cure lies in the secrets Kanin carries, if Allie can get to him in time. Allison thought that immortality was forever. But now, with eternity itself hanging in the balance, the lines between human and monster will blur even further, and Allie must face another choice she could never have imagined having to make.
Posted by Anya at 12:30