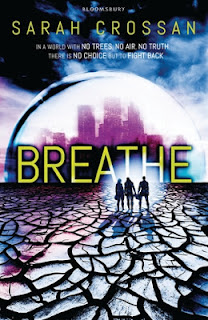 Publisher: Bloomsbury
Published: 11th October 2012
Pages: 384
Synopsis:
When oxygen levels plunge in a treeless world, a state lottery decides which lucky few will live inside the Pod. Everyone else will slowly suffocate. Years after the Switch, life inside the Pod has moved on. A poor Auxiliary class cannot afford the oxygen tax which supplies extra air for running, dancing and sports. The rich Premiums, by contrast, are healthy and strong. Anyone who opposes the regime is labelled a terrorist and ejected from the Pod to die. Sixteen-year-old Alina is part of the secret resistance, but when a mission goes wrong she is forced to escape from the Pod. With only two days of oxygen in her tank, she too faces the terrifying prospect of death by suffocation. Her only hope is to find the mythical Grove, a small enclave of trees protected by a hardcore band of rebels. Does it even exist, and if so, what or who are they protecting the trees from?

Review:
This world has lost its air, trees have completely died out and life worth living is safely in the Pod. The only thing is, freedom is the ultimate cost to having someone else control your oxygen. Although dystopian novels seem to be all over the place at the moment, this first in the series manages to be fresh and incredibly thought-provoking as good novels should be.

I read this without expecting too much but quickly fell in love with pretty much everything about this book. Alina is fiery and strong-willed, Bea is adorable and sweet on Quinn, and Quinn is a little bit thick but basically a good guy, at least he definitely gets better! The chemistry between them is incredible but not enough that you want someone to end up with someone wrong, just enough to really like their interactions.

With a few primary characters, all with different motivations and stories, Crossan blends them together by using multiple point of view chapters, allowing each character an equal say and also letting the reader see what the others can't. I loved this, as you really get to understand each character and fall for them, especially Quinn and Bea, whose worlds are turned upside down when they find out the truth about their Pod Minister.

Having said that, this book is very plot-driven; the importance is placed on the Resistance, their aim to re-plant the world, let people breathe for themselves. It's a very noble cause, and I'll admit I immediately rooted for the Resistance. But having a story driven by the lack of oxygen makes you suddenly very conscious of your own! Just... be wary of that.
Posted by Anya at 14:25