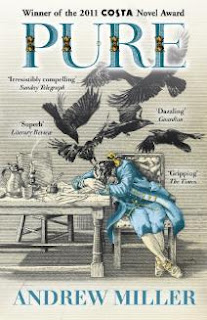 Publisher: Sceptre
Published: 9th June 2011
Pages: 342
Synopsis:
Paris, 1785. A year of bones, of grave-dirt, relentless work. Of mummified corpses and chanting priests. A year of rape, suicide, sudden death. Of friendship too. Of desire. Of love... A year unlike any other he has lived.

Review:
I've been wanting to read this for months, but I've been putting off until my dissertation topic was confirmed! Yes, I'm writing about this, among other historical fiction novels, for my dissertation.

The stink of Les Innocents cemetery is poisoning Paris, and Jean-Baptiste Baratte has been tasked with removing the bones and demolishing the church. The young engineer is both excited and reluctant to undertake such a task but soon gets into it, planning, gathering men to dig and rid the neighbourhood of the old bones that make their breath smell.

Miller creates a realistic 18th century voice, bringing us back to the jostling streets of Paris, the strong stench of decay and the vicious tongue of gossip. Baratte is a young man, he is susceptible to influence and worries over his reputation and dress. Following Baratte through his progress over a year, you see both him and his project grow, his body feeling more comfortable in the loud city centre and even see him fall for someone a little unexpected. The other characters were just as well-formed, Miller going into detail of them retiring for the night, to add normalcy to the disruption.

Although set in pre-Revolution France, there is little in the way of politics, probably because it had so little influence in what Baratte was doing. Yet I did want some more reference to political atmosphere at that time, but that's probably just the history student in me. I also wanted some more gruesome detail in the cemetery but again, that's just me.

Beautifully portrayed as late 18th century France, the accents and names and streets add that little bit of detail and conviction to the well-researched novel. Highly recommended to fans of the genre and in fact anyone interesting in demolishing a church-yard!
Posted by Anya at 14:26