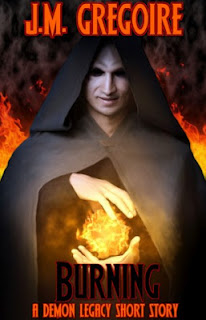 Format: ebook
Published: 2nd October 2012
Pages: 13 (prequel)
Synopsis:
Lucas was a typical playboy - lots of alcohol and a different girl every night. One woman brought his emotional walls and the beliefs he used to build them crumbling to the ground. Now, an unexpected visitor is going to change both their worlds forever.
Burning is the short story lead-in to the upcoming Demon Legacy series by J.M. Gregoire.

Review:
It was a bit of a rough start but the detailed descriptions give in to a world that is captivating. And while getting a story started can be difficult, once in the swing of it, it was an impressive supernatural world, with vampires and witches and demons. A very good start to a urban fantasy series!

Although the prose is well written, full of powerful language and easy to read, romance is apparently not her style! And I've got to ask, what was with the random question marks? Building up the romance might not have worked as well as it could have but god, she can write suspense and action! Lucas is a bit of a cliché character, a womanising vampire, and even though his love story with Natalia is short, you believe it. You want Lucas to find out what happened to her, you want to find out more about her coven and his powers to see auras.

All in all, a very good start to what I'm sure will be a powerful fantasy series!
Posted by Anya at 13:50