Between The Lines by Jodi Picoult 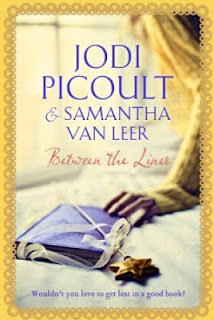 Publisher: Hodder andStoughton
Published: 5th July 2012
Pages: 384
Synopsis:
Delilah is a bit of a loner who prefers spending her time in the school library with her head in a book—one book in particular. Between the Lines may be a fairy tale, but it feels real. Prince Oliver is brave, adventurous, and loving. He really speaks to Delilah.
And then one day Oliver actually speaks to her. Turns out, Oliver is more than a one-dimensional storybook prince. He’s a restless teen who feels trapped by his literary existence and hates that his entire life is predetermined. He’s sure there’s more for him out there in the real world, and Delilah might just be his key to freedom.
Delilah and Oliver work together to attempt to get Oliver out of his book, a challenging task that forces them to examine their perceptions of fate, the world, and their places in it. And as their attraction to each other grows along the way, a romance blossoms that is anything but a fairy tale.

Review:
I was hesitant to start this; I thought it might be a bit young for me, just a little too fairy tale-ish that I thought it would annoy me. But I was pleasantly surprised to find that, even though it didn't have much substance to it, it was really cute!

I loved the idea of fictional characters having separate lives when the book is closed - it was actually very well explained in the book as thinking your stuffed animals came alive when you leave the room, much like Toy Story now that I think about it! Another thing was the fantastic illustrations, even though some were a bit weird, but as the book Oliver is stuck in is illustrated, I understood the need. Some were fantastic, little figures hanging off the end of the letter and such, it really supported the whole notion of characters being stuck in a book.

I immediately identified with Delilah - what book nerd hasn't wished to meet their favourite fictional character, or topple head first into a book? She was the typical nerd, only had one true friend that didn't quite understand her predicament, hung out with the school librarian and all that. Little stereotypical, but at least Delilah did come into her own person, mostly with Oliver's perspective of her above the book - little things that you could tell he loved about her, liking biting her lip and pacing while thinking. And Oliver was not your typical hero - said it enough times! He wasn't brave but was very clever and logical; they are reasons for that, which I thought were nicely complicated.

I loved the different perspectives. It wasn't just between Oliver and Delilah, it also had random sections from the book Oliver was stuck in, what the characters would have to act out when the book was opened. It made the real story that more interesting, seeing what Oliver and the rest had to put up with.

The ending - well. I liked it, it was the fairy tale happy ending a book like this needed. On the other hand, it was a bit weird. But original, so I can't judge too harshly.

All in all, a fun little read that reminded me of a time when all I wanted was a friend from my favourite book.
Posted by Anya at 17:17