Lady of Devices by Shelley Adine 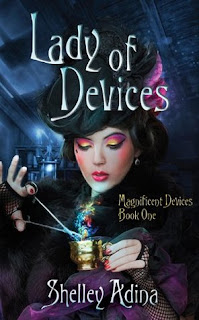 Publisher: Self-published
Published: 29th May 2011
Pages: 307
Format: ebook
Synopsis:
London, 1889. Victoria is Queen. Charles Darwin's son is Prime Minister. And steam is the power that runs the world.
At 17, Claire Trevelyan, daughter of Viscount St. Ives, was expected to do nothing more than pour an elegant cup of tea, sew a fine seam, and catch a rich husband. Unfortunately, Claire's talents lie not in the ballroom, but in the chemistry lab, where things have a regrettable habit of blowing up. When her father gambles the estate on the combustion engine and loses, Claire finds herself down and out on the mean streets of London. But being a young woman of resources and intellect, she turns fortune on its head. It's not long before a new leader rises in the underworld, known only as the Lady of Devices.
When she meets Andrew Malvern, a member of the Royal Society of Engineers, she realizes her talents may encompass more than the invention of explosive devices. They may help her realize her dreams and his . . . if they can both stay alive long enough to see that sometimes the closest friendships can trigger the greatest betrayals . . .

Review:
First off, I think I should mention that I only picked this book because I love steampunk. Like, really love it. The mix of old and new in corsets and devices and pocket watches - how awesome is that! Anyway, the book takes this idea of an alternate world, a Victorian type setting with the power of electricity and steam that fuels the world and its politics. It was not what I expected. Not sure what I did expect, but I liked what the story turned into, a young woman having to fend her herself.

After Claire's father dies in the aftermath of a political nightmare, the rest of her family runs away to Cornwell. Claire decides to stay in London, get a job - unheard of for a young lady - and pay for her entry to university. I admired her strength and self-esteem right away; she was strong-willed and spoke her mind but knew how to play the game, pretend to be respectable in society but still have her mind. However, she loses her house to rioters, forcing her to move through the streets of London on her own, just inviting someone to rob her. And they did, stealing everything she owns including the landau, a steam-powered car. This is where it got interesting: she used her knowledge of chemistry to.. well, I'll stop there in case of spoilers.

Claire's travels in the underworld of London were incredible, very typical of Dickens, with the gang of starving, pocket-picking kids. Snouts, the ring-leader of the gang, was surprisingly clever and kind of a nice guy; some of the kids were even sweet but some of them did not quite warm up to Claire and therefore I didn't like them! But it was admirable what Claire did to try to make their life better.

Even though there was a bit of a twist that I didn't see, changing the direction of the story completely, it was a welcome twist that made it a very good book and an interesting first read of the steampunk genre.

This went towards my genre variety and ebook challenges
Posted by Anya at 14:21