Interview With The Vampire by Anne Rice 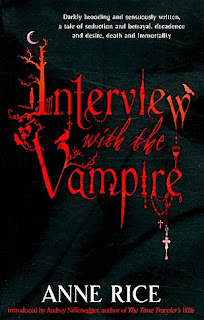 Review:
Louis is living in eighteenth century New Orleans when he gets the chance for eternal life. Lestat, the stubborn vampire that he is, only wanted Louis' house and lands, but apparently immortal life is a fair trade for that. However, Louis is twice the vampire Lestat ever was, learning and experiencing what it is to live forever and not just taking pleasure in the kill.

This was actually a re-read for university, which I'm glad for because the first time I read it, I obviously did not appreciate the language and the awesome that is Interview with the Vampire. Despite very heavy details that takes a while to grasp, it is an incredibly engaging story, from Louis' determination to not be like Lestat, lazy and self-absorbed, to the creepiness of Claudia's growing into a fully-fledge vampire mind in a ten year old's body.

Anyone at all interested in vampires or the Gothic will have already read this, but in case you haven't or you're not into that sort of thing, I still think this is one of those books that you have to read - whether it be for the vampires, the seduction, the blood or the drama.
Posted by Anya at 13:41