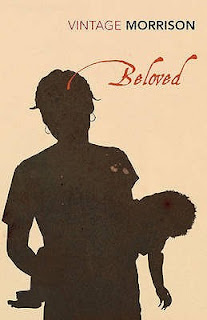 Publisher: Vintage Books
Published: 1st October 2008
Pages: 324
Synopsis:
Sethe was born a slave and escaped to Ohio, but eighteen years later she is still not free. She has borne the unthinkable and not gone mad, yet she is still held captive by memories of Sweet Home, the beautiful farm where so many hideous things happened. Meanwhile Sethe's house has long been troubled by the angry, destructive ghost of her baby, who died nameless and whose tombstone is engraved with a single word: "Beloved."
Sethe works at beating back the past, but it makes itself heard and felt incessantly in her memory and in the lives of those around her. When a mysterious teenage girl arrives, calling herself Beloved, Sethe's terrible secret explodes into the present.

Review:
I have mixed feelings about this book. It took me ages to get into and honestly, I don't think I ever really wanted to read it - uni book, you see. And yet it was strangely addictive: the whole first half you have no idea what horrible thing Sethe could have done and why a baby is haunting their house. The horror I felt when I found out what Sethe had done is indescribable. I physically felt sick. And yet, in a weird kind of way I can understand her passion for wanting her children safe. Even if her methods are disturbing to say the least.

There was an odd narrative to the story as Morrison moves swiftly between past and present, letting the reader fit the pieces together themselves, which you don't until nearly half way through. Quick tip, I mostly only knew when it was in the timeline if Baby Suggs was alive! The setting is also pretty incredible: the black mostly-post-slavery community is close knit and you really feel for the family when they run away. Plus the women in this story are very impressive, even if the mother/daughter relationship is a bit whacked.

I've spent many hours in university deciphering the meaning to Beloved and have got very few answers. We discussed memory, colour and identity; I'll leave it up to you, if you've read it. As for Beloved, the strange teenager, we discussed whether she was real, a figment of imagination, even a spirit possessing a body, but came to the conclusion Morrison just wants to keep us guessing.

A very odd read but worth it for the tough subject matter and the subtle ghost story.

This counted towards my genre variety challenge.
Posted by Anya at 14:28