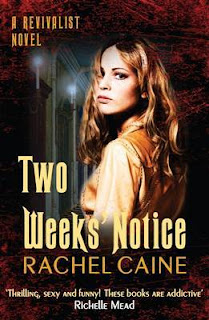 Publisher: Alison and Busby
Published: 24th September 2012
Pages: 384
Synopsis:
Making a living can be rough if you're already dead. After dying and being revived with the experimental drug Returne, Bryn Davis is theoretically free to live her unlife - with regular doses to keep her going. But Bryn knows that the government has every intention of keeping a tight lid on Pharmadene's life-altering discovery, no matter the cost. Thankfully, some things have changed for the better; her job at the rechristened Davis Funeral Home is keeping her busy and her fragile romance with Patrick McCallister is blossoming - thanks in part to their combined efforts in forming a support group for Returne addicts. But when some of the group members suddenly disappear, Bryn wonders if the government is methodically removing a threat to their security, or if some unknown enemy has decided to run the zombies into the ground...

Review:
There are so many great and fantastic things I could say about this book
- on the first book, I wrote about how much I admired Bryn. In this one, that love has not wavered: she was just as brilliant and vulnerable. Plus this time, she's managed to get Pat to actually commit, who is such a sweetheart I forget he and Joe are supposed to be hulking ex-military guys!

This whole story is simply ingenious, and much darker and I think better than the first one. Caine gets major props for thinking up such a horrible and yet entirely possible invention, characters that are vile and test your view on humanity, plus such gross details: who knew a spoon could be so dangerous?

There were so many little twists, pages of action that left me breathless and grossness that made me squirm. Considering how much I hate needles, I'm surprised I didn't just drop the book every time Bryn needed her life support injection! Plus there are bad guys pretending to be good, good guys that get hurt and more surprisingly  bad guys that have their moment to be good. Bryn has to investigate Pharmadene’s contacts and nearly gets blown up. Oh, and Manny Glickman is back! Didn't realise he was also in the Red Letters series, which I highly recommend.

Finally, I have to say the last 50 or so pages? I almost screamed and I was on the edge of my seat, practically bouncing with the need to know what happened! But God, what a twist! Just like Bryn, I was speechless and felt betrayed: God's sake Pat, what the hell is wrong with you?! I have no idea how they're going to get their way out of this one. If you thought the life injections were bad, then the self-harvesting nanites with a taste for human flesh? *shudders*

This counted towards my Genre Variety reading challenge: urban fantasy
Posted by Anya at 11:00