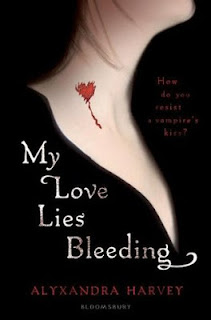 Publisher: Bloomsbury
Published: 1st January 2010
Pages: 248
Synopsis:
The Drakes are rather different to your usual neighbours. They are vampires and some of the members of the family date back to the twelfth century. One of the children, Solange, is the only born female vampire known and, as such, she poses a direct threat to the vampire queen. Her best friend Lucy is human, and when Solange is kidnapped Lucy and Solange's brother, Nicholas, set out to save her. Lucy soon discovers that she would like to be more than just friends with Nicholas. But how does one go about dating a vampire? Meanwhile, Solange finds an unlikely ally in Kieran, a vampire slayer on the hunt for his father's killer.

Review:
I love vampire stories. You'd have thought I would have had enough by now, but no. Still love them. And this one did not disappoint: with complicated vampire mythology, which is always impressive to read something different, even if it was a little confusing at first! Not to mention keeping track of Solange's seven brothers!

Solange is the first girl in this vampire family for decades and it is destined that a female Drake would take over the vampire crown. Although a little confusing, the whole thing about a prophecy and different kinds of vampires depending on how cruel their maker was and young vampire's being born rather than made; love it all. Although I did feel that detailed bits were squashed into small sections and often left me confused. But bearing in mind there was a lot of action to deal with, what with Solange's creepy stalkers because of her vampire-pheromones, then I understand that a lot of information was needed for groundwork of a series.

The story was split into two narratives between the best friends Lucy and Solange. I liked both girls, they were typical teenage girls, you know apart from the whole vampire and threat of death stuff. I especially loved Lucy's quips, I laughed out loud several times from her sheer awesomeness. Lucy and Solange might be brilliant but the interactions between the girls and boys were pure awesome, especially Lucy and Nicholas.

As for the romance, Lucy and Nicholas' chemistry was sparking off the page, unfortunately unlike Solange and Keiran's. I thought it happened too quickly, without much explanation or even real interactions but still sweet.

All in all, a really fun and sweet new twist of vampire legends, with family and human hunters, not to mention extremely hot vampire guys and Victorian costumes!
Posted by Anya at 16:01