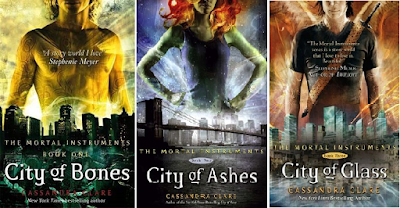 When fifteen-year-old Clary Fray heads out to the Pandemonium Club in New York City, she hardly expects to witness a murder― much less a murder committed by three teenagers covered with strange tattoos and brandishing bizarre weapons. Then the body disappears into thin air. It's hard to call the police when the murderers are invisible to everyone else and when there is nothing―not even a smear of blood―to show that a boy has died. Or was he a boy?This is Clary's first meeting with the Shadowhunters, warriors dedicated to ridding the earth of demons. It's also her first encounter with Jace, a Shadowhunter who looks a little like an angel and acts a lot like a jerk. Within twenty-four hours Clary is pulled into Jace's world with a vengeance, when her mother disappears and Clary herself is attacked by a demon. But why would demons be interested in ordinary mundanes like Clary and her mother? And how did Clary suddenly get the Sight? The Shadowhunters would like to know...Exotic and gritty, exhilarating and utterly gripping, Cassandra Clare's ferociously entertaining fantasy takes readers on a wild ride that they will never want to end.

When Clary discovers she is a Shadowhunter, her world is turned upside down. Over six books, she and friends try to take down manic-Shadowhunter and Clary's father, Valentine.

There are many things I loved about this series. The characters are amazingly varied, from in-the-closet, bad ass with a bow, Alec and magical Magnus with his glittered hair, to mundane turned vampire Simon. I also loved the love story. Thinking they were brother and sister for a while did put a crimp in the tale but all they've been through just makes Clary and Jace stronger.

The series actually works in two trilogies. In books one to three, Clary and Jace fight their feelings for each other after they were told they are brother and sister. Awkward or what? They all also have to figure out Valentine's next move, as he attempts to take over Idris and all Shadowhunters. Valentine's action's escalate until Clary is forced to do something desperate, to stop him and to save Jace. 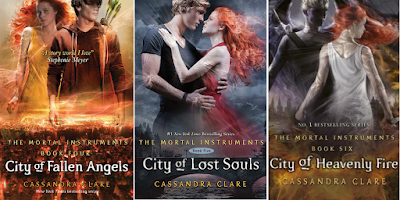 Then in books four to six, it's Valentine's son Sebastian that they have to look out for. Cunning, charming and even more dangerous than Valentine, Sebastian has a different plan for Shadowhunters, one that threatens all their lives. What I especially loved about the complicated plot was how it all linked together. Although the series is roughly split in half, events overlap and affect things and people throughout the books.


This is an epic urban fantasy series and one of my favourite series ever. Just everything about it, from the characters, the world building, the magical creatures, everything adds up to make one incredible story. The journey the group goes on, to save themselves and the world of Shadowhunters, is awe-inspiring and so amazingly written, you just fly through the pages. A great series that cannot be recommended enough.